Wacker Neuson's first quarter revenue grew 7%, due to a 9% increase in Europe and 13% increase in the North American market. 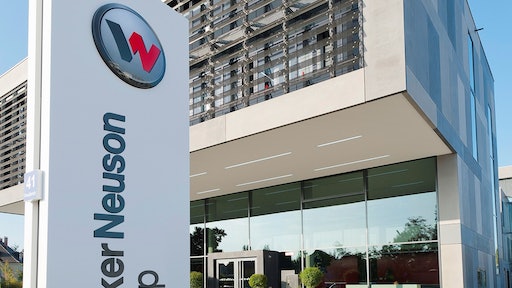 For Q1 2017, Munich-based international light and compact equipment manufacturer Wacker Neuson reported a record rise in revenue for the first quarter of the year. Adjusted profit before interest and tax (EBIT) increased significantly. At the close of Q1, order intake and backlog showed a clear rise over the figures posted for the prior-year period. The company has confirmed its forecast for fiscal 2017 as a whole.

“The year has got off to a very promising start for our group. The investment mood among many national and international customers in most of our target industries was very positive. This pushed our revenue to a new record high for a first quarter,” explains Cem Peksaglam, CEO of Wacker Neuson SE. Revenue for the first quarter of 2017 rose to EUR 338.5 million and was thus 7% higher than the previous year (previous year: EUR 316.4 million). Adjusted to discount currency effects, this corresponds to an increase of 6%.

The Europe region, which accounts for the largest share of group revenue at 73%, reported a 9% increase in Q1 2017 revenue relative to the previous year. “Business developed strongly in Europe, in particular in Germany and France. We also reported high double-digit growth from our business with key accounts in Europe. In addition, after experiencing significant downturns in recent years, the agricultural sector has started to recover, which is reflected in high order intake for our Weidemann and Kramer brands,” adds Peksaglam. Revenue in the Americas region grew even more rapidly than in Europe, with the group reporting a 13% increase relative to the previous year. “Demand in the oil and gas sector in North America remained weak. However, we benefited from stronger demand in other areas, in particular the construction industry. Moving beyond persistent problems with the start-up of our skid steer loader production, these machines were now once again able to contribute to growth in the region during the first quarter,” continues Peksaglam. “Business in South America also showed positive momentum as anticipated, with the region reporting double-digit gains.”

In contrast to this, the group reported a drop in revenue in Asia-Pacific (accounting for roughly 3% of total revenue). Revenue for the region fell by 45% relative to the previous year. This was due to a one-off effect in the first quarter of 2016 linked to dealers in China stocking up on compact equipment, which almost doubled revenue for the country at that time. Business in Australia and New Zealand developed positively for the first time in a long period, with the two countries posting high double-digit revenue growth for the first quarter of 2017.

Profit before interest and tax (EBIT) decreased 18.3% to EUR 14.3 million in the first quarter. This resulted in an EBIT margin of 4.2% (Q1/16: EUR 17.5 million; 5.5%). This decrease is not attributable to the group’s operating activities. Instead, it is the result of a positive one-off effect from the elimination of intercompany profit in the prior-year quarter (change of evaluation method for inventories) and a negative one-off effect in the first quarter of 2017 resulting from increased expenses for the Executive Board. When adjusted to discount both effects (EUR 6.8 million in total), EBIT for Q1 2017 rose 28% relative to the previous year. The adjusted EBIT margin amounted to 4.8% in the first quarter of 2017 (Q1/16 adjusted: 4.0%), a figure that reflects the group’s improved operational profitability.

In contrast to the previous year, cash flow from operating activities for the first quarter of 2017 was positive at EUR 1.6 million (Q1/16: EUR -6.1 million). This is primarily due to the changes in net working capital relative to the prior-year quarter. Free cash flow improved slightly at EUR -31.1 million (Q1/16: EUR -35.8 million). The company expects free cash flow for the year as a whole to be positive.

“We expect the projected positive trend in our business to continue throughout 2017. Our optimism is strengthened by the current healthy order situation, positive trends in our core markets of Europe and the US, a more upbeat investment mood in the agricultural sector, growing business momentum in South America and a gradual recovery in markets dependent on the price of raw materials such as Australia,” elaborates Peksaglam. At March 31, 2017, accumulated order intake for compact equipment was around 11% higher than the prior-year figure. Order backlog lay an impressive 22% above the figure reported for the same period last year.

The Executive Board still expects revenue for fiscal 2017 to amount to between EUR 1.40 and EUR 1.45 billion (2016: EUR 1.36 billion) and the EBIT margin to range between 7.5 and 8.5% (2016: 6.5%). This profit forecast does not include potential one-off earnings from the sale of a real-estate company held by the group in the range of middle double-digit millions of euro, which it announced back in February. For the current fiscal year, Wacker Neuson has earmarked around EUR 120 million in total for investments (2016: EUR 107 million). The Executive Board and the Supervisory Board will propose a dividend of EUR 0.50 per share (2016: EUR 0.50) at the upcoming AGM on May 30, 2017 in Munich. This figure corresponds to the payouts effected in the previous 2 years.

AEM has released its Canada Ag Tractor and Combine Report for July 2021.
September 1, 2021

Volvo Trucks North America and NFI are demonstrating the viability and benefits of electric trucks as part of the Run on Less – Electric showcase, Goodyear is partnering with Plus on autonomous trucks and more news you may have missed.
Sara Jensen
August 25, 2021

The FTR Transportation Conference and NTEA Truck Product Conference are the latest events to be postponed in 2021. Several events have been cancelled or postponed due to the global pandemic and other industry factors.
Sara Jensen
August 24, 2021

The prototype vehicle uses the proposed production specification chassis frame and drivetrain of the finished vehicle and will test all electromechanical and thermal properties.
Volta Trucks
August 20, 2021
Follow Us