For the 10th year in a row, Freightliner Trucks has presented two Ride of Pride trucks, with this year's trucks going to Schneider National and Cargo Transporters. 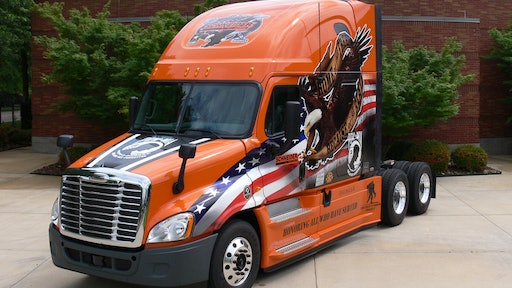 Now in its 10th year, the Ride of Pride program was initiated by Ed Keeter, a Vietnam War veteran and former shift manager at the Cleveland manufacturing plant as a way to recognize military veterans.

“Ride of Pride symbolizes respect for and great pride in our servicemen and women, and our employees take a great amount of pride in building these trucks,” says Michael McCurry, Cleveland plant manager for Freightliner Trucks. “We are so pleased to present Schneider National and Cargo Transporters with these traveling tributes to veterans.”

The truck presented to Schneider National will join the company’s nationwide fleet of more than 10,000 vehicles. The fleet already includes the 2007, 2008 and 2011 Ride of Pride trucks.

The trucks were presented during a special ceremony at the Freightliner Trucks Cleveland, NCF, manufacturing facility where the trucks were built.

Now in its 25th year, Rolling Thunder is a nonprofit organization with the mission of publicizing and educating the public about prisoners of war and those missing in action. Rolling Thunder provides financial aid, food, clothing and other essentials to veterans and their families. The organization also authors or advocates for legislation designed to improve the plights of prisoners of war and soldiers missing in action.