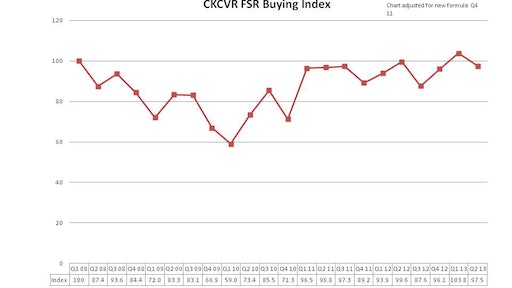 Results from the Q2 2013 Fleet Sentiment survey conducted by CK Commercial Vehicle Research shows that private fleets are currently adding capacity with additional units at a faster rate than for-hire fleets. Half of the private fleets participating in the quarterly survey indicated they were adding capacity with the power units they expected to purchase (in the next three months) with an average of more than 40% of those orders designated for that purpose. For the same time period, a third of for-hire fleets said they were adding capacity averaging just 6% of power units directed to growing their vehicle population.

Chris Kemmer, Principal at CKCVR notes the correlation between responses to the added capacity inquiry and one asking about driver shortage. "Based on what our survey participants are telling us for-hire fleets have a much, much larger problem with a shortage of drivers so adding capacity is hard; the private fleets in our advisory group generally don't have that issue. They have an incentive to add capacity to be sure their products get shipped and the ability to do so because they can fill the trucks with drivers. We expect the looming Hours of Service regulation implementation adds to the urgency to solidify hauling capacity."

Other highlights from the Q2 2013 Fleet Sentiment Report:

Fifty-one fleets participated in the Q2 2013 Fleet Sentiment Survey. They operate in excess of 35,000 Class 8 trucks and 95,000 trailers. Responses were received between April 16 and April 25.