The presidents of CECE and CEMA recently presented the EU Parliament with a 10-point action plan detailing how to strengthen industrial production in Europe. 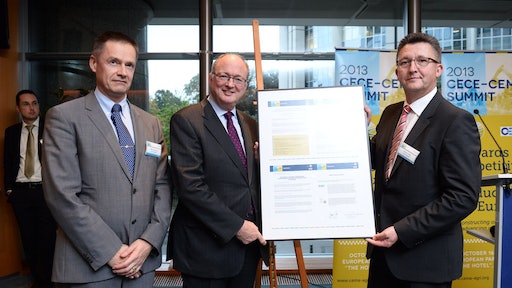 The Presidents of the Committee for European Construction Equipment (CECE) and CEMA - European Agricultural Machinery (CEMA), Johann Sailer and Gilles Dryancour, have presented to the EU Parliament a manifesto with a 10-point action plan for strong industrial production in Europe. Doing this, the European construction equipment and agricultural machinery industries underline that they are committed to play an active role in reaching the target of the European Commission to raise the share of industry in Europe from 16% GDP to at least 20% by 2020. Both industries maintain important production facilities and R&D sites in Europe.

“We call on the EU to make industrial competitiveness the centre of EU policymaking, and this is our contribution,” stated Dryancour while handing over the manifesto to MEP Malcom Harbour at the CECE-CEMA summit held on October 16 in the European Parliament. He continued, “a strong and competitive industrial production in Europe is essential to drive Europe out of recession and keep our common economic area wealthy and economically successful.”  As global competition is fierce, both industries underline that the EU needs to set the right framework conditions for them to deliver growth, create jobs and compete at an international level. According to them there are 10 major fields of action:

Details on these points and on the industries’ positions can be downloaded from the associations’ websites.

The CECE-CEMA summit was attended by more than 300 participants; industry representatives, EU policy makers and partners of the industry. It was hosted by Amalia Sartori, Member of the European Parliament and Chair of the Parliament’s important Industry Committee.

Among the keynote speakers were also Massimo Baldinato, member of the Cabinet of EU Commission’s Vice-President Antonio Tajani and on behalf of industry Olof Persson, President and CEO of Volvo Group, and Andreas Klauser, Chief Operating Officer EMEA of CNH Industrial, who outlined the perspectives of the sectors and its requests to politics.

‘Evoluzione Terra’ aims to foster an innovative approach to sustainable and social farming activities through the use of Agriculture 4.0 technologies.
CNH Industrial N.V.
November 12, 2020
Follow Us