VDMA Optimistic for German Construction in 2014 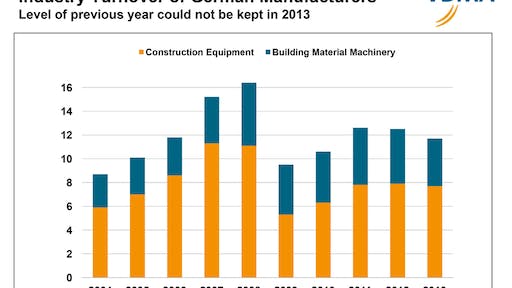 “We can look back on a satisfactory business year overall; given all the heterogeneity of our sector,” says Johann Sailer, Chairman of the VDMA’s Construction Equipment and Building Material Machinery Association, commenting on the result of the economic survey at his association’s executive board meeting in mid-February in Frankfurt. Despite a continual improvement in the course of the year, at the end of the day the construction equipment industry still had to contend with a moderate sales decline of 3% to a current total of 7.7 billion Euro. In contrast, in the building material machinery sector, turnover clearly declined by a total of 13% to the current level of 4 billion Euro.

In view of the splendid situation in the domestic construction industry, the German market painted a surprisingly weak picture for construction equipment manufacturers, with the exception of civil and structural engineering machines. In Europe France and Switzerland as well as Scandinavia impressed. Business in the Middle East and North America continued to develop well. The BRIC nations, but also the hope-bearing markets such as South Africa or Indonesia, generated too few impulses. In 2014 the manufacturers expect an improvement here. The same applies for the European market, where in Southern Europe the economic recession is now expected to have finally bottomed out. The indications for 2014 are generally of an upward trend.

As far as the building materials machine manufacturers are concerned, it is Russia, the Middle East and the countries of South-East Asia in particular where business is currently going well. But this is not sufficient at the moment to compensate for the declines in other regions. In this connection there is a halt to investment for sectors with excess capacities, which also include the cement industry. In several threshold countries projects have been put on hold also due to the worsening in the exchange rate, because they are simply becoming too expensive for local investors. “Nevertheless, in 2013 some really good orders were also received,” says Sailer. But due to the longer processing times compared to standard machines, they will not make an impression in terms of sales until later during this year.

EU emissions directive causing a stir in the market

A topic of constant worry for the construction equipment manufacturers is the implementation of the EU emissions directive. In some companies this issue has tied up R+D capacities by almost 100%. As a result, innovations in other sectors have fallen by the wayside. A further challenge is the recent new complexity, i.e. the diversity of the products offered per manufacturer. “There is currently a product renewal process like never before,” Sailer points out. Because various transitional periods are also used in different ways by the manufacturers, the market is responding correspondingly. For the customers the new machines produced at extremely high development costs did not automatically mean greater benefit or product improvement. To that extent, it was difficult, he said, to convince them to pay a higher price for the machines. Many manufacturers have thus suffered.

In the wake of the thaw in the political climate, the German construction equipment and building material machines industry would like to show more commitment again in Iran, a giant - and prior to the embargo - very good market for our companies. “We know about the good reputation, which our machinery and plant enjoy there,” says Sailer. The customers are there, the demand is there and also the desire and will of the German industry to deliver.” The problem is the banks. Currently it is simply not possible to get any capital investment”.

The German construction equipment and building material machinery industry is calling on the new federal government to once again earmark the revenue from truck and potential private vehicle toll charges for the development and renewal of the infrastructure. “Beyond that we need greater reliability in energy policy,” says Sailer. Particularly with regards to the wind and maritime energy theme, an area where many building machinery manufacturers are also involved and investing new technology, clear decisions by the legislators and continuity are absolutely indispensable, he said