FTR reports net orders for Class 8 trucks in September were the highest since September 2005, and up 27% compared to 2013. 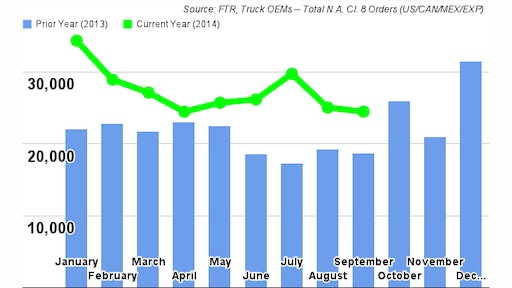 FTR has released preliminary data showing September 2014 North American Class 8 truck net orders at 24,477 units, the best September since 2005 and 27% above a year ago. September is just the latest month to show year-over-year improvement, now at 20 consecutive months. Class 8 orders for the latest six month period through September annualize to 310,000 units.

September Class 8 orders were similar to August and may reflect some pull ahead of Q4 orders in response to OEM production constraints as fleets attempt to reserve build slots. Don Ake, FTR Vice President of Commercial Vehicles, comments, “If some of the September activity indeed is pull ahead, Q4 orders will be below expectations for the time period. However, Class 8 orders overall are solid across the board and in line with FTR forecasts. Order activity has snapped back into traditional seasonal patterns, albeit at levels consistent with a very strong Class 8 market. We enter the fourth quarter with positive momentum, which means the first quarter build numbers should be robust. “

Final data for September will be available from FTR later in the month as part of its North American Commercial Truck & Trailer Outlook service.