FTR reports February Class 8 truck orders were in line with expectations, reaching 30,900 units which was 12% lower than January but was still the best February since 2006. 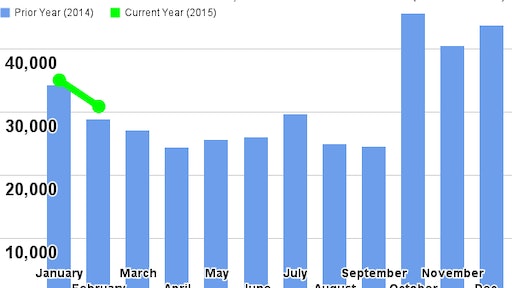 FTR has released preliminary data showing February 2015 North American Class 8 truck net orders at 30,900 units, in line with the company’s expectations. February order activity was 12% below January settling into a more reasonable, seasonal level than the previous four months. However, it was still the best February since 2006, and a 7% year-over-year improvement. Orders have totaled 378,000 units over the last 12 months.

Don Ake, FTR Vice President of Commercial Vehicles, comments, “Orders were spot on our expectations of 31,000. The market has calmed down but is still operating at a very healthy level. The economy and freight demand is more predictable, so orders should follow their cyclical trends for the next few months. However, it will be important to see how these orders are distributed throughout the year. There are still build slots that need to be filled in the first half of the year in order to keep build rates up. January orders were skewed for more deliveries in the second half of the year. It will be interesting if this 'speculative' order pattern repeats in February.”

Final data for February will be available from FTR later in the month as part of its North American Commercial Truck & Trailer Outlook service.