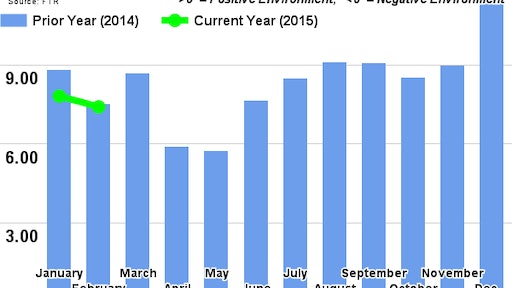 FTR’s Trucking Conditions Index (TCI) for February at 7.4 reflects a softening in capacity utilization due to the Hours of Service suspension and fluctuating diesel prices. FTR expects the TCI to rise into the summer months and beyond, and it could hit double digit positive readings before 2016 as the industry anticipates another round of regulatory drag. Should the Hours of Service changes that were suspended last year be reinstated in September, the index would move up dramatically.

Details of the February TCI are found in the April issue of FTR’s Trucking Update, published March 31, 2015. The ‘Notes by the Dashboard Light’ comments on slowing economic measures and how they may play out with regard to freight and trucking. Along with the TCI and ‘Notes by the Dashboard Light,’ the Trucking Update includes data and analysis on load volumes, the capacity environment, rates, costs, and the truck driver situation.

Jonathan Starks, FTR’s Director of Transportation Analysis, comments, "We are beginning to hear of push back from shippers about the continued rise in freight rates. While we still expect all-in per mile rates to be fairly flat for most of 2015, base rates for trucking (and specifically contract rates) are still showing solid year-over-year gains. Shippers are seeing two items that cause them to question the continued increases: fuel costs and spot market activity. Fuel costs are down 40% and, since fuel is about a quarter of truckings costs, it is a big deal. However, the decade-long gain in acceptance of fuel surcharges has made most of that impact a direct pass-through to the shipper. It just isn't going to show up in base rates any more. The other item is that spot market rates are well below last year's levels. There is just one word for why this happened: weather. Spot market rates jumped 20%+ during parts of 2014 due to the lasting impact of the Polar Vortex. While parts of the U.S. have had severe weather this winter, it has not been nearly as expansive as what we had a year ago. After accounting for the drop in fuel during the year, spot rates are only down modestly during 2015, but this is opposed to the gains being seen for dedicated and contract rates. It takes careful explanation to educate shippers on why trucking costs are going up - but it is certainly a necessity in order to attract and retain quality drivers. And drivers are something that both carriers and shippers want!”