April trailer orders down 30% from a year ago

FTR reports net orders of trailers in April were down 9% month-over-month and down 30% year-over-year, though there is still a healthy order backlog. 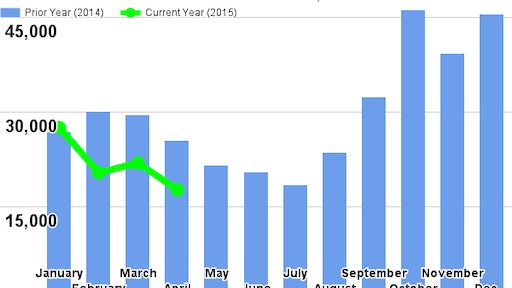 FTR reports April 2015 U.S. Trailer net orders were 17,700 units, down 19% month-over-month (m/m) and down a disappointing 30% year-over-year (y/y). Order activity has cooled off in large part because many major fleets placed their orders in 2014 to cover 2015 requirements, but were also impacted by general economic factors. However, even with the decline, trailer orders have totaled more than 340,000 the past 12 months creating a still-healthy backlog, albeit 10% below January peak. Trailer build in April continued at a good pace, up 24% y/y.

Dry van and flatbed orders were impacted the most by the April decline. Dry van orders were down 32% m/m with build falling more than 6% from March. Flatbed orders were the lowest since July, but build remained strong at these manufacturers. Both orders and build remained solid for refrigerated vans as well as liquid and bulk tankers. Dump trailer orders started to slide in April; production, however, stays strong.

Don Ake, FTR Vice President of Commercial Vehicles, comments, “The traditional summer slump arrived early this year. This is not surprising considering the huge amount of orders placed late last year and the big backlogs. However, reports indicate the trailer market is cooling off, and the increased number of cancellations is definitely a concern. Order rates should keep falling through the summer months. Build rates are still robust, but most OEMs did not match their great March numbers. This indicates fleets are not as anxious to take deliveries which is consistent with a slowing economy and a moderating freight market.”