FTR reports October Class 8 truck orders were 30% higher than September, but were below expectations for the start of the fall ordering season. 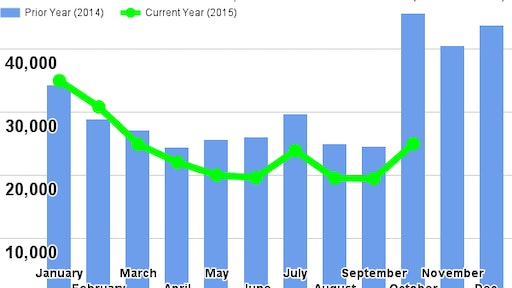 FTR has released preliminary data showing October 2015 North American Class 8 truck net orders at 25,000, 30% above September. While the October orders came in significantly higher than the previous month, they were below expectations. As fleets finalize their equipment budgets for the coming year, October orders typically rise considerably. Although orders were at their highest level since February, they were down a substantial 45% year-over-year. Orders for the last 12 months are still an impressive 324,000.

Don Ake, FTR Vice President of Commercial Vehicles, comments, “The fall order season has gotten off to a mediocre start this year. Orders were not that great, but they weren’t terrible either. It is not time to panic just yet. Fleets are being more cautious this year in their ordering, which is to be expected considering the weak GDP numbers and slower manufacturing growth. If November and December orders are in the same range, then 2016 production should meet expectations. Overall, backlog remains strong helping to keep the market propped up. On the other hand, there was an uneven distribution of these orders among the OEMs, which unfortunately could result in upcoming production cuts at some plants being more than expected.”