CEMA reports sales of European agricultural machinery in Europe are expected to stabilize in 2016 with the UK, Italy and Spain anticipated to see growth in certain segments. 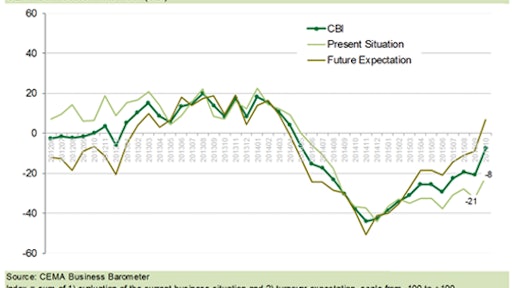 Sales of European agricultural machinery in Europe are expected to fall in 2015. In almost all major European markets and for almost all product groups demand has dropped when compared to 2014 levels. However, with a market stabilization expected for 2016, it looks like the bottom of the cycle has been reached.

Major European markets such as Germany, France and the UK are estimated to experience a decline of 10%, 11% and 15% respectively. In Italy, the drop is somewhat less pronounced with an expected reduction of 4%. By contrast, the Spanish market shows an increase of approximately 6%. For the UK and Italy, the expectation is that demand will stabilize in 2016, whereas France and Germany will probably face small decreases. Spain is expected to be the positive exception with a small increase forecasted for 2016.

Looking at different types of machinery, forage harvesters are the only category in which demand is growing, while the market has been shrinking for all others.

So far, tractor registrations are down 7.3% in comparison with the first nine months of 2014. Over the full year 2015, the tractor market is expected to decrease by a total of 7.1%. The market for tractors is stable in Spain, but negative in all other markets. It is expected that in 2016 demand will remain at similar levels as in 2015.

The market for combine harvesters shows mixed results with contractions in the UK, Spain, France and the Netherlands, yet some positive signals received from Italy and Germany. Overall, the market is about to decrease by approximately 5%. As is the case for other segments, the market for combines is expected to stabilize in 2016.

Mowers are the product group where the biggest decline was seen with almost a 10% reduction. A significant decline is seen in almost all markets. Only Spain and Turkey face stable demand. In 2016 the overall market will be similar in Europe, besides a relatively small decrease on the German market.

Forage harvesters are the only product group where the market is growing – at a rate of 2.8%. The French and Spanish market grew particularly strongly. Only the Belgium market is experiencing a significant decline, while all other markets remain relatively stable. No major changes to market demand are expected for 2016.

The baler market demand is expected to drop by 8.7% over the whole of 2015. There are differences in several European countries with large decreases like the UK and France and others with small increases such as Italy. In most countries a relatively small decrease in demand is expected for 2016. France will be the exception with stable demand.

Signals from the sprayer market aren’t positive either, with a decline of 6% in 2015, particularly in Germany, the UK and Belgium. Relatively high growth is seen in the Spanish and Dutch markets. Sprayers are the only product group for which an increase in demand is expected in most countries for 2016.

In line with the overall picture (negative trend in 2015, with a stabilization expected for 2016), the CEMA Business Barometer gives a similar signal, showing an upward trend in recent months that is reversing the previous dip. The barometer is a monthly survey that is sent to the European agricultural machinery industry and covers all the major product categories, providing a regular overview of the business mood based on current business sentiment and the expected turnover in the next six months.