Despite trailer orders being down 7% in October, they were still higher than expected due in part to the large increase in refrigerated van and strong dry van and dump trailer orders. 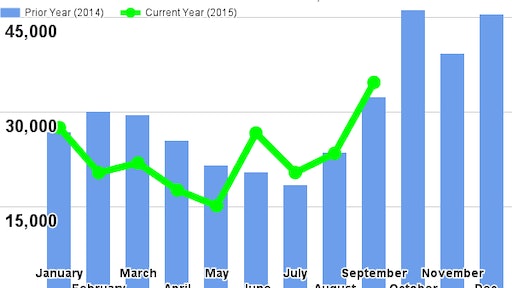 Refrigerated van orders were spectacular in October, showing a 40% improvement over September. Dry van activity was solid, albeit down 22% m/m only due to the comparison against the robust September order activity. Dump trailer orders remain strong. Flatbed orders were at their highest level since March but still down 51% year over year (y/y). Tanker orders were weak in October. Over all segments, trailer production was down 8% (per day) versus September.

Don Ake, FTR Vice President of Commercial Vehicles, comments, “In spite of the monthly or yearly comparisons, October was still an outstanding month for trailer orders. Strength in the dry van and refrigerated van segments boosted the total. Flatbeds and tanks have really cooled off, however. The dry van orders appear to be 'pent-up' demand orders for trailers that were not replaced after the Great Recession. Fleets have money and continue to upgrade their trailers. Freight is weaker, so this is not expansion demand. The refrigerated van market is now expected to remain strong throughout 2016. The large order activity in this segment (a record) was totally the result of large fleets placing their entire 2016 requirements now, in order to reserve production slots.”