AEM reports that exports of U.S.-made construction equipment declined 19% in 2015, with all regions experiencing declines. 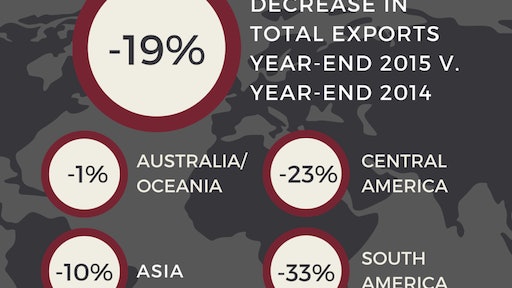 Exports of U.S.-made construction equipment ended 2015 with a 19% decline compared to the previous year for a total $13.9 billion shipped worldwide. All world regions experienced declines, led by Africa and South America, according to the Association of Equipment Manufacturers (AEM), citing U.S. Department of Commerce data it uses in global market reports for members.

AEM’s Benjamin Duyck, Director of Market Intelligence, provides some insights: "As 2015 came to an end we can take stock of the yearly export trends. In the fourth quarter of 2015, construction machinery exports continued to experience year-over-year declines for the 12th consecutive month. The year-end also marked the third consecutive yearly decline. These declines do need to be placed in the proper context as exports boomed after the Great Recession and strongly supported the U.S. construction equipment industry. Additionally, there are regional differences affecting exports.

"The deteriorating export position does not come as a surprise as the U.S. faces strong external headwinds. Global economic markets such as China and Brazil are experiencing deep-rooted structural problems and a strong U.S. dollar is making U.S. exports more expensive for international buyers. The lower commodity prices (metals and energy) are causing shifts in some market segments and equipment demand, domestically and internationally.

"As noted before, U.S. exports are not deteriorating as strongly for every region. For example, 2015 exports to Australia, the U.S. third largest trading partner, grew 2.5% compared to 2014 (and were up 20% in the fourth quarter compared to the same quarter in the previous year). While for 2015 there was a small 1% regional decline for Australia/Oceania, the region clearly outperformed the global community."

The top countries buying the most U.S.-made construction machinery during 2015 (by dollar volume):