Preliminary data from FTR indicates Class 8 truck orders fell once again in April, and activity is expected to remain soft during the summer slow order season. 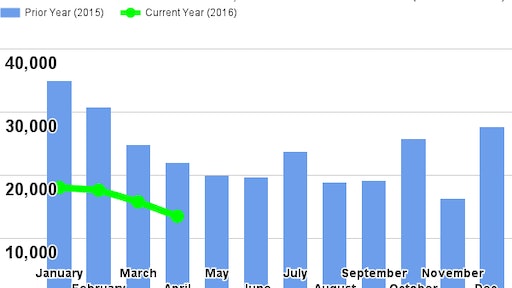 FTR has released preliminary data showing April 2016 North American Class 8 truck net orders fell for the fourth consecutive month to 13,500 units; showing a negative 16% month-over-month (M/M) and -39% year-over-year (Y/Y) comparison and the lowest April since 2009. Orders across the board were weak as the Class 8 market tries to find the bottom of this cycle. Activity is expected to remain soft during the traditional summer slow order season. Class 8 orders have annualized to a paltry 190,000 units over the past three months. For the past 12 month period the annualized rate is 237,000 units.

Don Ake, Vice President of Commercial Vehicles at FTR, comments, “Class 8 orders were once again below expectations with the downshift in order activity continuing. It looked like the market was going to stabilize, but this order volume is surprisingly low. Fleets have right-sized for the current freight volumes and do not need additional units. They are being very cautious to not over-extend, until business improves some. Inventories remain bloated.

“The OEMs will not be able to maintain current build rates under these order conditions. It appears more production cuts are on the way, consistent with the FTR forecast. Backlogs are quickly shrinking and are expected to fall below 2014 levels relatively soon. A big order month could stop the bleeding, but we are entering the 'summer slump' so order activity will probably get worse before it gets better.”