FTR preliminary Class 8 orders for July were 56% lower than a year ago and 19% below June 2016 due to significant order cancellations; orders are expected to rise slightly in August. 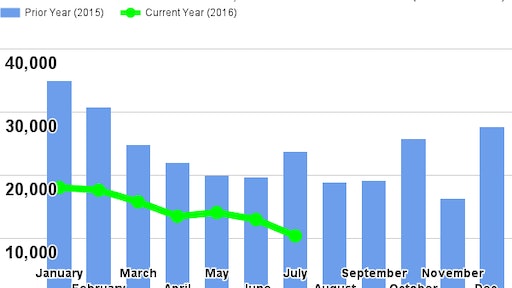 FTR releases preliminary Class 8 net orders for July at 10,400 units, 56% below a year ago and the weakest month since February 2010. Several significant order cancellations resulted in net orders falling 19% below June and being below expectations. Individual OEM performance was mixed, depending on the number of cancelled orders. Mexico orders were relatively strong. July activity further eroded annualized order rates, now at 210,000 for the past 12 months.

Don Ake, Vice President of Commercial Vehicles at FTR, comments, “Usually there are a low number of cancellations in July, but not this year. The high cancellations are likely the result of fleets placing large orders at the end of 2015, for delivery a year out. OEMs are trying to confirm Q4 production, with some orders shaking out of the backlog as a result.

“Without the cancellations, July orders would have been similar to June. Freight growth remains sluggish, so fleets are backing off expanding the number of trucks. They are expected to continue to replace older units in the short-term, however. Orders should increase some in August.”