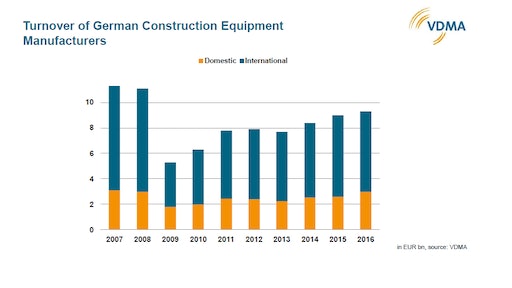 As in the year before, in 2016 companies benefited from their strong position on the European and especially on the German market. After an already strong 2015, the domestic market grew by another 20% and achieved a level almost as high as in the record year of 2007 with sales of the German industry on the domestic market amounting to 3 billion Euros. “In view of this high level, a further growth seems hardly possible, even if our customers continue to make good business in Germany,” says Johann Sailer, Chairman of the Construction Equipment and Building Material Machinery Industry Association of the German Engineering Federation, VDMA.

Good rise in sales in Europe

Compared to the previous year, the European market rose by 8%. Next to Germany, France was the second growth driver. Declines were recorded only in the United Kingdom and in Central Eastern Europe. Northern and Western Europe are supposed to remain stable markets also in 2017. The industry also expects Southern Europe to modestly recover even further. Thus, sales figures of construction equipment in Europe will not see any significant changes in 2017.

As forecasted, in 2016, the industry saw a slight double-digit sales decline in Northern America compared to the previous year. Companies expect the market to become more stable this year. Infrastructure programs and investments announced by the U.S. administration are expected to stimulate the demand in the construction industry as a whole. No market improvements can be reported for Latin America. On the average, markets in the region were dragged down by the weakness of the Brazilian construction industry.

Strong plus in India

Asia is showing good impulses. After 4 years of decline, China has seen another return to growth in 2016. The Indian construction equipment market increased by 30%, powered by strong investments in road construction. Also in 2017, this sector will keep growing. Experts of the industry estimate South East Asia to show positive signs, especially in Indonesia and Myanmar. In the Middle East a substantial turnaround is, however, not expected.

With the elections coming up in the Netherlands, France and in Germany important political decisions are about. The export-oriented construction equipment industry relies on a politically and economically integrated Europe as their backbone of economic success, of good jobs and people’s welfare in general. “We will only keep growing in the future if we further strive for international solutions and co-operations. In a highly specialized sector like ours, where special machines are not available in every region of the world, open markets are highly essential. We all depend on free trade and good economic sense. This applies for Europe and the United States alike,” says Sailer.