AGCO's Reid Hamre is a recent recipient of the Honorary American FFA Degree for his efforts to enhance the partnership between AGCO and the FFA. 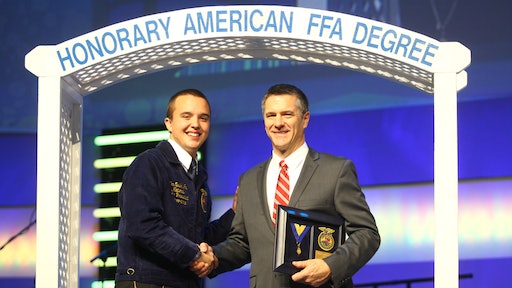 Reid Hamre, who leads Fendt brand marketing efforts for North America at AGCO in Duluth, GA, was recently recognized by the National FFA Organization and awarded the Honorary American FFA Degree, the organization’s highest Honorary Degree. Reid was chosen because of his dedication to enhancing the partnership between AGCO and FFA, and for his support of agricultural education across the country. He received his Honorary American FFA Degree during the 85th National FFA Convention and Expo October 24 to 27, 2012 in Indianapolis, IN.

Reid has been integral in growing AGCO’s relationship with FFA and played a key role in the development of the AGCO Dealer Scholarship program, which provides college scholarships for FFA members nationwide. Now in its second year, the new AGCO dealer scholarships added an additional $115,000 of annual support to the National FFA Scholarship Program. In addition to scholarships, Reid has worked to grow AGCO’s presence at the National FFA Convention and Expo, allowing more interaction between FFA members and AGCO employees.

Reid’s award is even more meaningful, as the nomination came directly from the National FFA Foundation. His national nomination is a testament to Reid’s involvement at an organization-wide level. Ryan Tate, senior regional director at the National FFA Foundation, says, “Reid has worked diligently to help FFA engage with AGCO employees. These efforts have broadened our visibility within the company and led to some unique opportunities for additional support from year to year. Overall, Reid has been a great advocate for FFA at AGCO.”