Aker Wirth will deliver a Mobile Tunnel Miner, designed to bore a network of tunnels, to an underground copper mine in Chile. 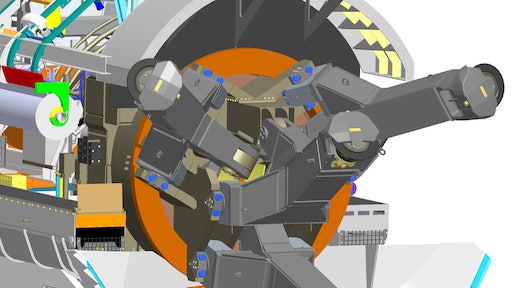 Aker Wirth and Codelco, the world’s largest producer of copper, signed a contract at the end of 2012 on the delivery and testing of a Mobile Tunnel Miner (MTM). This innovative machine will be tested from mid-2014 in the Chuquicamata mine in Chile where the underground mining of copper is planned for the future.

The Aker Wirth MTM will bore a network of tunnels in the Chuquicamata mine in preparation for the later mining of rock containing copper. “Previously, tunnels of this type were blasted out of the rock in copper mines,” explains Ulrich Frenzle, Vice President Mining & Construction at Aker Wirth. “These will be created mechanically for the first time with the MTM4, thus improving tunneling efficiency and safety in the mine significantly.” The machine will also need to cut tight curves with an exact profile for this purpose, an operation which is particularly demanding on the manoeuvrability and precision of the machine.

The MTM combines the flexibility of a roadheader with the robustness of a tunnel boring machine. The self-propelled machine excavates rock with four powerful hydraulically actuated arms fitted with disc cutters. The muck is conveyed to the rear of the machine by a loading apron with loading disks and via a chain conveyor where it is loaded. In addition to circular cross sections like those achieved with a tunnel boring machine, the MTM can also cut rectangular and horseshoe-shaped or semi-rectangular tunnels with a bore diameter of up to 6 m. Thanks to swivel joints in the machine, the turning radius of the 40 m long MTM4 is only 12 m, meaning it is ideally adapted to the demands of the Chilean copper mine.

The MTM is also innovative in terms of its mobility, as it can move forward flexibly using a walking mechanism and backward with a crawler. A positioning control system ensures that the machine is always precisely aligned.

“We expect to set new standards in mine development with the MTM. Its development fully reflected quantifiable customer benefits and safety issues,” says Frenzle. “When compared to drill and blast, which up until now was the usual method employed in rock of this hardness, the MTM4 shall be able to tunnel up to 12 m a day, thus more than doubling the current performance.”

The machine operates with special undercutting technology and is designed for especially efficient tunneling in hard rock. It also cuts extremely precise tunnel profiles, considerably reducing the efforts for tunnel fortification. “Depending on project conditions, costs for tunneling are more than 30% less than for drill and blast,” summarizes Frenzle.

Another advantage over drill and blast is that the MTM requires considerably less work from personnel at the tunnel face. The MTM is operated from a central control cabin on the machine itself. A high degree of automation minimises contact between personnel and both moving components and rock. Thanks to its flexibility, the MTM can be easily driven away from the tunnel face for maintenance purposes, and this also contributes to the safety of operating personnel.