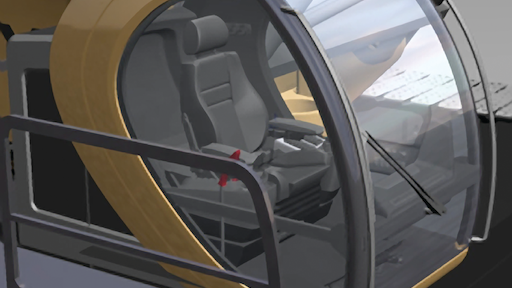 For its new 8000 Series crawler cranes, SANY developed the UltraCab featuring improved visibility due to an increased surface area of glass and the cab's ability to rotate upwards 20 degrees.

When developing its new 8000 Series crawler cranes, SANY America Inc., Peachtree City, GA, wanted to find a way to distinguish its company and crawler cranes from other manufacturers in the global marketplace. “We wanted something that would be very functional, and would provide a better environment for the operator,” says John Lanning, head of SANY Global Crawler Crane Development. To achieve this goal, SANY developed a new operator cab designed to enhance an operator’s experience with the crane.

Along with a better operating experience, SANY wanted its new UltraCab to have a unique appearance from its competitors. The new cab features a more rounded design, similar to the shape of a helicopter, compared with previous cabs which tend to be more square. With this more rounded shape SANY was able to incorporate slightly larger windows than it normally uses for operator cabs to achieve one of its main goals, improved visibility.

Placement of the displays within the cab was an important factor in increasing visibility for the operator, as well. While SANY wanted operators to be able to see all of the displays easily, it also didn’t want them distracting the operator’s view outside of the cab and inhibiting productivity. All of the screens necessary for crane operation—the camera screens, Load Moment Indicator (LMI) screens and crane functionality screens—were placed in the same location, just below the operator’s direct line of sight. This enables the operator to easily see what’s going on outside the cab, yet still have the various display screens readily visible within the operator’s peripheral view. “[Operators] can see the operation of the winches and other components on the crane and see behind the crane,” says Lanning.

Additional visibility is provided by the UltraCab’s ability to rotate upwards 20 degrees. Lanning says this is a feature typical of larger capacity crawler cranes. “To be able to tilt the cab makes it easier for operators who are working at high elevations,” he says.

While at the moment the UltraCab is only being used on SANY’s crawler cranes, Lanning says there is potential for its implementation on other equipment designed by the company. He says the enhanced visibility features especially would be applicable in other equipment.

The IVECO FIT CAB includes devices for improving the driver’s mobility and overall fitness while the MAGIRUS is a reinterpretation of the original brand.
Iveco
July 3, 2019

Lochmann Kabinen GmbH, Siac SpA and KML GmbH will exhibit together at one stand to demonstrate their goal of developing synergies to develop and produce modern cabins for a wide range of applications.
Lochmann Cabine S.r.l.
February 12, 2019

The Smart CAB for agricultural applications features a high-performance CAN structure and an integrated connectivity unit to upload new smart farming features.
July 17, 2017

Hella to Premiere Genius CAB to U.S. Market at CONEXPO 2017

In addition to various lighting products, Hella will exhibit the Genius CAB developed in tandem with other OEM suppliers which contains various innovations from the participating companies.
Hella Inc.
March 3, 2017