A field of comfort

Agricultural OEMs continue to make improvements to the operator cab to ensure a more comfortable and productive operator. 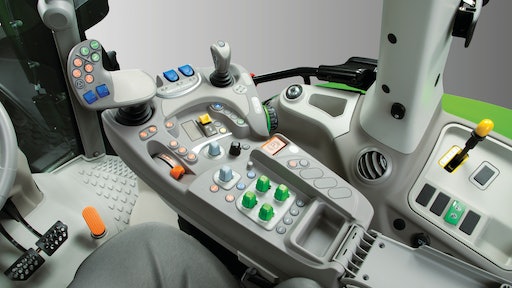 The multifunction armrest, MaxCom, enables operators to manage 90% of the tractor's functions and components from the armrest.

OEMs and cab manufacturers are continually working to find the best materials, cab layouts and ventilation systems to keep operators comfortable—especially farmers working long days in the field. Cab features such as operator visibility are vital to a farmer's comfort and consequently productivity, leading to manufacturers constantly looking for new design methods to improve visibility, such as increasing the amount of glass a cab contains.

For its new Mach 2 twin-track tractor (learn more, 11291533), Antonio Carraro wanted to guarantee the best possible front, rear, overhead and lateral visibility. To achieve this, the company chose to incorporate its StarLight cab into the tractor design says Massimiliano Carraro, Product Innovation Marketing Manager, R&D Department, at Antonio Carraro SpA (company information, 10454338). The StarLight cab is completely composed of glass, including the door (see image, pg. xx). Carraro explains that the door is manufactured from a whole piece of glass without any structural frame that might inhibit visibility. In addition, by using particular glass angles throughout the cab, not only is visibility improved but also the amount of noise entering the cab. “Noise levels…are the narrowest and lowest in the category of compact tractors,” says Carraro.

Same Deutz-Fahr (company information, 11290352) enlisted the help of Italian design company Giugiaro Design to develop its MaxiVision Cab which received a 2014 German Design Award for its innovative design (learn more, 11348194). According to Luca Campagna, R&D Cabins Coordinator at Same Deutz-Fahr, the design goal for the MaxiVision cab was not only to provide maximum visibility but also “to answer market requests for a highly comfortable and technological cab.”

The Same Deutz-Fahr and Giugiaro Design team met these requests by creating a spacious cab and taking into careful consideration the placement of the vehicle controls. A multifunctional armrest on the operator seat, known as MaxCom, is the heart of the MaxiVision Cab, says Campagna. Operators are able to manage 90% of the functions and components of the tractor with the MaxCom armrest. “It was studied to offer very high comfort in terms of usability and ergonomics,” he says.

Campagna explains that the commands on the armrest are organized in different areas according to their functionality and frequency of use. Included on the armrest are the new PowerCom controls which enable operators to manage several functions using only two fingers. All of the main functions of the tractor are there at the fingertips of the operator. All command controls are backlit for improved visibility, as well as verification of status; different colors are used to indicate whether a command is engaged or disengaged.

Customers have the option of adding Same Deutz-Fahr’s iMonitor2 to the multifunction armrest. The iMonitor2 is a 12-inch capacitive touchscreen monitor installed directly onto the armrest. Due to the monitor’s large screen, up to four windows running four separate applications can be viewed at one time on the display. “This way everything is under the driver’s control and there is no need to have additional monitors for specific functions,” says Campagna.

iMonitor2 is designed to work like a tablet or smartphone. Operators can enlarge windows, select touchscreen buttons and scroll through various menus to adjust settings and implements all with their fingertips. “During driving or high vibration field work, an additional MMI (man-machine interface) helps to navigate the iMonitor2 without the usage of the touchscreen,” says Campagna.

Other features of the MaxiVision cab include a dynamically suspended driver seat which reduces low-frequency vibrations for the operator. The seat is also designed to prevent any discomfort caused by hard stops, ensuring less strain on the driver. Campagna says there is the option to add active seat air-conditioning to keep the operator cool and dry.

While having a lot of glass around the structure of a cab helps improve visibility, it can also lead to discomfort for the operator due to the large amount of sunlight that can enter into the cab. This solar buildup can cause items within the cab, including the operator, to become too warm. To address this issue in its new T4 Series tractors that will be used in tree fruit applications, New Holland Agriculture (company information, 10171610) collaborated with cab manufacturer Saf-T-Cab Inc. to develop the new KOOL-CAB fruit cab (learn more, 11309341).

One of the primary new features of the cab is the glass used for the cab windows, says Brian Peranick, Vice President of Sales and Marketing at Saf-T-Cab Inc. (company information, 11317584). The window glass consists of two pieces of glass that are bonded together using laminated film. This lamination is made up of three different pieces of plastic which are constructed in a manner that prevents the sun’s UV rays from entering the cab. “The lamination will reduce the amount of solar buildup in the cab by almost 40%,” says Peranick.

Because of the lamination’s ability to prevent UV rays from entering the cab, the need for window tinting has been eliminated. Older versions of the fruit cab featured tinted windows, similar to those used in passenger cars, to help keep operators cool. However, Peranick says window tinting darkens the glass, making it more difficult to see out the windows. Eliminating the need for tinting provides a much brighter operator area within the cab and improves visibility out the windows.

In addition to using the new laminated glass for the cab windows, the air conditioning system was efficiently reconfigured to provide better cooling performance. Peranick says integrating different components into the HVAC system and developing a new way of recirculating the air within the cab enabled Saf-T-Cab to create a better cooling system.

Other features within the cab include the integration of a CommandArc console. Justin Raski, New Holland Brand Marketing Manager for Mid-Range Tractors, explains that the console places all of the tractor controls on an arc to the right of the operator. “The controls are prioritized on the right-hand side of the cab according to how frequently they’re used. Regardless of how the operator moves their hand, all of the controls are within easy reach,” he says. The CommandArc console is standard on all of New Holland’s T4 Series tractors.

Due to its use in fruit tree applications, the cab features a low profile and tapering to minimize the tractor’s footprint within orchards and vineyards. Raski says the actual factory-installed cabs for the T4 Series measure 102.1 inches high, while the new KOOL-CAB fruit cab measures just 89 inches. “The overall design of the outside of the cab is very sleek and very smooth so that there are minimal opportunities for the tractor and the cab to hook onto tree limbs or tree fruit, whether that’s fruit or nuts,” adds Peranick.” That’s really what we’re addressing in addition to operator comfort.”

When New Holland introduced the Tier 4 Final version of its T4.75 PowerStar Series tractor it included a particulate matter (PM) catalyst to ensure emissions compliance (learn more, 11309327). Though the technology has been around since the 1980s, only within the last decade have PM catalysts become more prevalent in the truck and car industries to meet emissions regulations. According to Ken Paul, Marketing Manager at New Holland North America, this is the first time the technology has been adapted for use in the agricultural industry.

The PM Catalyst is a particulate separator placed downstream of the diesel oxidation catalyst (DOC) in the exhaust system. As particulate matter within exhaust gas passes through the PM Catalyst, it is burned off when it touches the walls. “The benefit is that the filter does not block due to the high flow of exhaust gasses, so fuel efficiency is maximized and the operator notices no loss of usable horsepower,” Paul says. In addition, Paul says there is no effort needed from the operator to activate the cleansing process and the catalyst is maintenance free.

An FPT 3.4 liter engine on the tractor has a high combustion efficiency that ensures very low levels of particulate matter remain in the exhaust stream. The PM Catalyst is then able to filter out any remaining particulates to ensure compliance with Tier 4 Final/Stage IV emissions regulations. Paul says the catalyst is best suited for applications with a power requirement under 76 hp.

The trend towards developing equipment which runs on alternative forms of energy—such as hybrid technology or biofuels—continues within the heavy equipment industry, including agriculture. New Holland, for example, showcased its methane-powered concept tractor at Agritechnica 2013 (event information, 10265518).

AGCO Corp. (company information, 10727147), has also developed a tractor which runs on biogas. The tractor, which uses dual-fuel technology to enable operation using either gas or diesel, is currently available in Sweden and a few other markets in Europe.

Search: 11357274 at oemoffhighway.com to read the full article about these advancing tractor technologies.