During MINExpo 2012, Atlas Copco previewed the upgrades it will be making to its Boomer underground mining and tunneling rigs beginning in 2013. 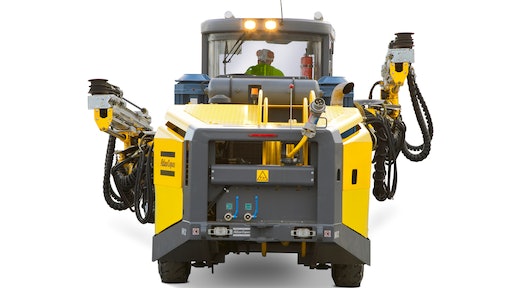 Atlas Copco previewed a new package of upgrades to its Boomer underground mining and tunneling rigs at MINExpo in Las Vegas, September 24 to 26. The entire package of upgrades and improvements will be applied to all new computerized Boomer rigs beginning in the second quarter of 2013. The Boomer range was represented in the booth by a Boomer M2 C.

Boomer face drilling rigs can be equipped with up to four booms providing a coverage area of 16 to 208 square meters (172 to 2,239 square feet) and the most extensive range of high performance rock drills on the market (16 to 30 kW,) designed to tackle all rock types and drilling conditions.

Johan Jonsson, product manager at Atlas Copco’s Underground Rock Excavation Division, explains, “The new Boomer combines all the benefits of Boomer technology with a wide range of new features and functionality to meet any challenge that miners may face. With these improvements, we are confident that the new Boomer series offers one of the most powerful and productive underground mining rigs and tunneling rigs on the market.”

Jonsson adds that the upgrades to the Boomer range will satisfy the increasing demand for automation and documentation of all drilling operations.

Operator comfort and safety were also priorities for the new series of Boomer upgrades. For example, the FOPS/ROPS certified cabins are air-conditioned and ergonomically designed, featuring the latest operator seat and controls. Depending on the rig type, an operator can choose to run the rig from a standing or sitting position. All of this contributes to increased productivity in the field.

Environmental issues were also addressed in the new Boomer upgrade package. Carbon emissions have been reduced to a minimum because the diesel engines are used only for moving the rigs around the site while electricity is used for drilling. Furthermore, stage 3B/Tier4 Interim engines and biodegradable hydraulic oils are offered as options.

Underground Manager is a new Windows based software package designed to be used in conjunction with Atlas Copco's range of intelligent underground drilling equipment. The new software incorporates functions that were previously separated into individual products, such as Tunnel Manager for face drilling and Ore Manager for long-hole drilling. Underground Manager also introduces functions and features that were not previously supported, such as blast design and blast simulation. Other features such as Computer-Aided Design (CAD) file import/export will allow users of the software greater flexibility in such areas as drill plan design. It contains a new drill plan generator, complete 3D view of the tunnel, smart interpolation of contours and improved logging and reporting functions.

Precisely and reliably track your fuel with maximatecc’s CAN Bus IntelliSensor. The IntelliSensor has no float arm or moving parts, ensuring that you always get accurate fuel measurement readings.
November 1, 2022