Bell to Present Next Generation Large Trucks at bauma 2016 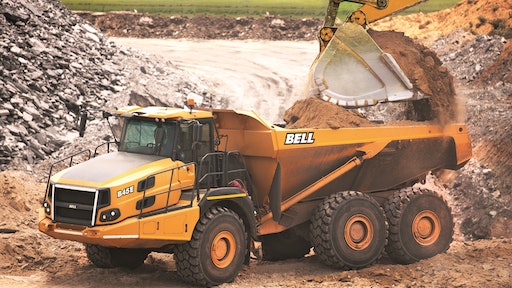 Articulated Dump Truck (ADT) specialist, Bell Equipment, will build on its successful world preview of its prototype B50E truck at Intermat 2015 by showcasing another model in the company's E-Series Large Truck range at bauma 2016, the B45E. With the global market creating increased demand for 45-t trucks, the B45E with its rated payload of 41,000 kg, a bin volume of 25 m³ and a powerful new engine has the potential to become the most popular model in the range due to its overall value proposition to customers.

The E-Series Large Truck program has been in development for 3-1/2 years and is planned for worldwide release in late 2016. The range is powered by the new Mercedes Benz HDEP engine platform and optimized for off-highway use by MTU. Like their smaller truck counterparts, they are also all fitted with Allison transmissions.

Comments Tristan du Pisanie, Bell Equipment's Product Marketing Manager, "While new for us, the HDEP engine platform has been in production with Mercedes Benz for 7 years. It is an engine that Mercedes Benz is very familiar with and we are confident that our customers will appreciate the advances in terms of fuel economy and power density over our D-Series machines."

When comparing the large truck E-Series to the outgoing D-Series, all models have a useful increase in power with the new engine platform. The larger models also move to the Allison 4700 transmission which provides seven gear ratios to provide for better gradeability with reduced fuel consumption. Payloads have also increased.

All of the models up to and including the B45E are within 3,500 mm width, which is a key number for European transport legislation. The B45D was a wider truck which required a special transport permit in many European countries.

"The D-Series has proven itself as the industry benchmark delivering the lowest cost per ton of dirt hauled and a key requirement of the E-Series Large Truck program was to improve on this. During comparative testing between the B40E and the B40D, it was found that, taking into account all of the variables, the B40E will deliver a 6-7% lower cost per ton to Bell customers than the B40D. Similar improvements will be seen across the entire range and this will impact directly on our customers' profitability and ability to tender more competitively."

"The move to a seven-speed Allison transmission across the range, with the exception of the B35E, effectively delivers better performance due to the smaller steps between gear ratios, which keeps the engine at optimum revs more consistently," says du Pisanie.

To accommodate the larger seven-speed transmission, Bell has removed the automatic retarder on the transmission and opted to rather incorporate this important feature into the wet brake system. Du Pisanie explains, "The retardation is still operated automatically and the new position of the retardation will not adversely impact on brake life. This is because extensive testing has shown that at the low pressures generated in the brakes during retardation there is always oil between the wet brake plates, so there is no touching and wear."

Engines across the E-Series Large Truck range incorporate a Jacobs engine brake, activated by an additional lobe on the camshaft which is automatically engaged when the operator's foot is off the accelerator. "The retardation power of the Jacobs engine brake is higher than the engine braking produced by the outgoing V6 and V8 engines on the D-Series trucks. The benefit is that a lot less retardation outside of the engine is required," says du Pisanie.

Traditionally in the Bell D-Series range of ADTs the brake system and gears shared common oil in the axle. "This required a specialized oil because it's difficult to get a compromise between the oil needed for brakes and gears. In some of our remote markets this oil was difficult to source. With the E-Series Large Trucks, our engineers opted to use two separate commonly available and optimized oils for either brakes or gears in the axle. Not only have we been able to select the best suited oil in each instance but we have also introduced dedicated cooling, for the brake oil, across the range to improve system durability in heavy-duty applications."

According to du Pisanie, Bell is making use of the E-Series Small Truck cab for the Large Truck range due to the positive feedback that has been received from customers in terms of operation and ergonomics. Electronic bonnet opening has been added to the Large Truck cab as an additional, convenient feature.

The operator's experience has been a key focus area of the E-Series truck program with the objective of simplifying the interface and improving the ergonomics by taking into consideration the lifestyles of today's younger generation of operators.

"Smartphone technology is growing in popularity and we also wanted to build the familiarity of what happens in your car into what happens in our E-Series trucks," explains du Pisanie. Therefore, the E-Series cab has a full color screen and an automotive mouse interface to control the sealed display unit. The Bell ADT is the first to offer this technology and the standard reversing camera has also been integrated into the color screen display.

"Coinciding with our E-Series Large Truck program, we have even further improved the response speed of the color monitors in the cab. This not only affects the new Large Trucks but can be achieved on all existing E-Series machines with a software update," says du Pisanie.

Bell opted for an Isringhausen seat, with its own suspension and dampening system, to improve ride comfort and reduce whole body vibration. The seat also has a three-point safety harness which can be configured as an additional safety feature so that the truck's engine will only start once the seat harness is fastened. A heating option is also fitted for colder climates.

The full glass door, maximized window apertures and ideal operator position give unparalleled visibility. Safety blind spots are significantly reduced, particularly in the area commonly used for cabin access. "The Bell operator cabin has traditionally been one of the features most often praised by operators and the E upgrade makes the operator experience even better," says du Pisanie.

"Overall we are confident that we have looked critically at what needed to be included in the upgrade, and focused only on delivering real value-added improvements in terms of reduced cost per ton and safety, without compromising the platform that has served us so well for the last 15 years. We look forward to taking users through our trucks with the traditional Bell hospitality at bauma 2016," he says. 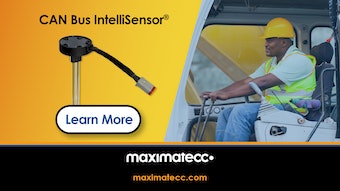