The eNow-Dometic system for Class 8 sleep trucks uses solar panels to power the Dometic Blizzard Turbo air conditioner without the need to use the engine, saving on fuel and emissions. 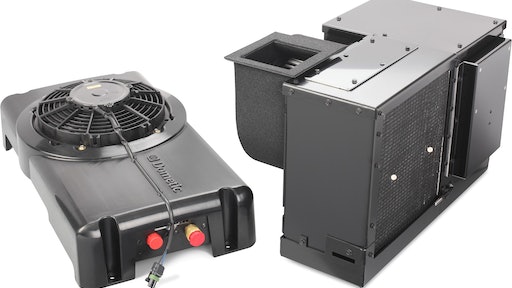 eNow Inc., the market leader in designing, developing and manufacturing solar-based power systems for the trucking industry, has announced the launch of its new Solar Photovoltaic (PV) Panels for the Dometic Blizzard Turbo auxiliary air conditioner. The combined eNow-Dometic system is the first solar-powered auxiliary A/C for Class 8 sleeper trucks. The eNow-Dometic system will be showcased at the NTEA Work Truck Show in Indianapolis at an informal briefing on March 2 from 3-3:30 p.m. at eNow booth #5675.

“eNow technology harnesses the power of the sun to provide electricity to the Dometic Blizzard Turbo auxiliary air conditioner, keeping truckers cool while eliminating the costly problems of idling, high fuel cost, equipment maintenance and CO2 emissions,” says Jeffrey Flath, President and CEO of eNow. “The eNow Solar system is specifically designed to keep costs low: Truck fleets can install eNow Solar PV Panels with no upfront cost and a ‘pay as you go’ program. The fleet owner, or independent driver, pays a small fixed monthly fee for the use of the hardware, as well as for the energy they use.”

With eNow, solar power is captured and stored in the on-board battery system and distributed to various truck/trailer functions, such as Dometic Blizzard Turbo auxiliary air. Solar charging systems vary on capacity depending upon the brand of the truck. Using solar to power Dometic Blizzard Turbo auxiliary air increases the life of the truck’s alternator and auxiliary battery system by reducing the alternator load at idle and over-the-road, and charging the battery more efficiently at its optimal voltage.