A revolutionary sprocket design alleviates environmental and functional impacts on the track system. 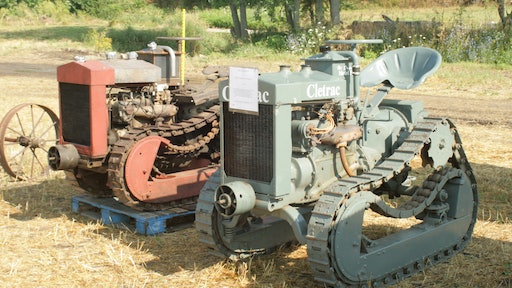 Our team will be in attendance reporting from the show floor.
Lori Ditoro
Jan 14th, 2023

It’s only January, but preparations are in full swing.
Lori Ditoro
Jan 13th, 2023

This video from COMVEC 2022 covers a motor for an e-air pump and an electric motor for power steering.
Sonceboz SA
Jan 13th, 2023

Experts tell us about the technology they were exhibiting during the event.
Würth Elektronik
Jan 12th, 2023

The number of available electric truck models is increasing, with OEMs ramping up production volumes of these models.
IDTechEx
Jan 12th, 2023

As farm machinery has increased in size, tire volume has also increased, but the overall footprint of the tires has not increased proportionally. As the load on each wheel increases, tires must be inflated to higher pressures to run safely.
Parker Hannifin Corp.
Jan 11th, 2023

Our team was happy to talk about clean mobility with Faurecia during COMVEC.
Lori Ditoro
Dec 20th, 2022

Learn more about the State of the Industry and our 2022 Top New Product Award winners.
Lori Ditoro
Dec 9th, 2022

Choosing to power an engine with an alternative to diesel can decrease carbon dioxide emissions by up to 90%.
Lori Ditoro
Dec 13th, 2022

The world’s prominent heavy equipment manufacturers will be at the show.
Gigi Wood
Dec 12th, 2022