How Compaction was Mechanized

The advent of mechanization and demand for improved road surfaces led to the development of the steam roller in the 1870s. 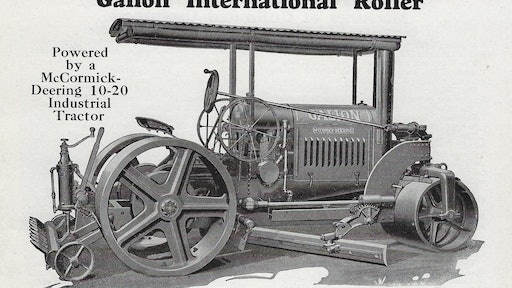 This Galion Iron Works International roller is equipped with an underframe blade and rear scarifier for road repair. It also illustrates a common engineering practice from the 1920s in which industrial tractors (in this case a McCormick-Deering 10-20) were used as the powertrains for an amazing variety of machines.
Galion Iron Works catalog, 1928, HCEA Archives

Over the past couple of months, we’ve seen how high-production compaction of fill material developed in the 1950s. Now, let’s go a long ways back and see how compaction was mechanized in the first place.

The original means of compaction was feet. Depending on the culture and the needs, it could be human feet or the hooves of livestock. Hooves, particularly those of sheep, were especially effective because a good deal of weight was directed onto a very small point on the surface, and the hooves tended to penetrate the surface and provide deeper compaction than mere foot traffic.

The first mechanized roller was a single smooth drum, mounted in a frame with a seat on top for the driver and a tongue for horses to pull it. The advent of mechanization in the 1800s, combined with the growing popularity of bicycles and the corresponding demand for improved road surfaces upon which to ride them, led to the development of the steam roller in the 1870s.

Steam rollers, and their early internal combustion successors, could be used for more than just compaction. Maintenance of rutted roadways required that the surface be broken up, bladed and compacted. Equipped with optional cleats that fit into holes on the rear drums, three-wheeled rollers could be used to pull a scarifier and a pull grader, then the cleats would be removed for finish rolling. Some roller manufacturers offered scarifiers and underframe blades as attachments mounting directly to the roller.

Along with the bulldozer, over its 50 or so years of use, the steam roller gained an iconic status among construction equipment. Both terms entered the vernacular as verbs, and while the basic concept of the bulldozer hasn’t radically changed, the term “steam roller” has been applied popularly to practically every kind of self-propelled compactor ever since.

As for those herds of sheep – when a three-wheeled roller was used for fill compaction, the depth of compaction was limited by the inability of the smooth drums to penetrate the surface. But as crawler tractors came into use as construction machines, the sheepsfoot roller was developed. It was a steel drum with spikes arrayed across its surface, and as it moved the action of the spikes replicated that of all those hooves penetrating and compacting the fill.