The first vibratory drum compactors were single drums towed behind crawler or wheel tractors, and progressed from the use of smooth drums to padfoot drums for deeper embankment compaction. 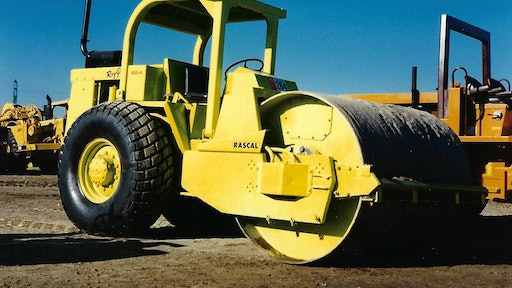 This 1968 Raygo 400 is part of its Rascal line, one of the most successful early series of self-propelled vibratory compactors.
HCEA Archives

Where a plate compactor operates by vibratory motion applied to a flat plate that contacts the surface being compacted, a vibratory drum compactor works by vibration being imparted to an enclosed drum by a moving eccentric or weight inside it. The force and frequency at which the eccentric moves, combined with the compactor’s static weight, determines the compaction force the compactor can impart. A vibratory compactor obtains superior results from deeper lifts of the material being compacted, but too much clay or silt in soil will hinder its effectiveness because of low internal friction in the material.

The first vibratory drum compactors were single drums towed behind crawler or wheel tractors. The exact company that first developed them is unknown, as is their year of invention, but Essick produced them as early as 1956. The evolution of drum designs is also unclear, but while smooth drums were more commonplace, padfoot drums for deeper embankment compaction were introduced by the early 1960s.

The original vibratory compactor may not have been a drum compactor at all. As early as 1953, Cedarapids was offering a towed vibratory pneumatic compactor for use in soil, subgrade and base material. Two models, one weighing 12-1/2 tons ballasted and riding on four 12:00 x 20 tires, and the other ballasted to 30 tons with two 24:00 x 33 tires, were produced as late as 1969. According to Cedarapids literature, the smaller roller could do the work of three sheepsfoot rollers or a 50-ton proofroller; in equal material it could compact 12-in. (30.5 cm) lifts in six passes as well as a sheepsfoot working 6 in. (15.2 cm) lifts in 10 to 15 passes, and deeper lifts meant fill could be placed more quickly, with costs being cut both in hauling and compacting. No other manufacturer produced such a roller, but in recent years Sakai introduced a self-propelled vibratory pneumatic.

An operator could get into trouble if the stability of the material wasn’t monitored. This author once saw a towed vibratory padfoot compactor bog down in a soft spot to the point that the wheel loader pulling it could not extricate it, and as it vibrated itself deeper into the mud the hitch failed before the compactor could be shut down.

The single-drum self-propelled vibratory compactors that are so common today hit the market in force in the mid-1960s, and tandem vibratory compactors soon followed. Over time, single drum machines could be designed for specific applications, and shell kits or interchangeable drums could be installed depending on work to be done.

Individual memberships within the USA and Canada are $35 for 1 year, $65.95 for 2 years and $99.95 for 3 years, and $55.00 U.S. elsewhere. HCEA seeks to develop relationships in the equipment manufacturing industry, and offers a college scholarship for engineering and construction management students. Information is available at www.hcea.net, by calling 419-352-5616 or e-mailing info@hcea.net.