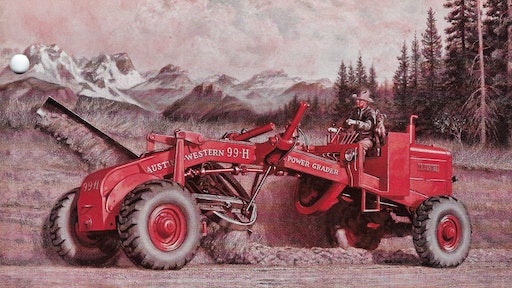 In the last installment, we looked at the Caterpillar Auto Patrol (learn more, 21136300). Introduced in 1931, it was the first purpose-built motor grader, as well as the first with fully power-operated blade controls and one of the first with pneumatic tires.

The next major innovation in motor grader design came in 1937 when the Austin-Western Road Machinery Company rolled out the Model 99. Descended from the Austin Manufacturing Company and Western Wheeled Scraper lines of graders that dated to the late 1800s, the Model 99 was the first to incorporate three more major breakthroughs.

One was all-wheel drive, and another was all-wheel steer. Until the 99 was introduced, all motor graders operated like the wheel tractors that powered the earliest motor graders, with the front axle providing the steering and the rear axle(s) the traction. The 99’s powered front axle helped pull the blade through a heavy load and keep the machine moving through rough terrain. Besides a turning radius that was greatly improved over conventional graders, steering at both ends made it the first grader with what we now call crab steering, as well as easier and more precise steering.

These two features had many benefits. The 99 was the first motor grader with identical front and rear tires, cutting maintenance costs and improving handling. More weight was on the front end, keeping the blade and optional scarifier against the load better than with an unpowered front end. It could work a windrow more efficiently, with control against the tires riding onto the windrow, plus better blending of the windrowed material. It applied superior power against the resistance of side-draft on the blade. When plowing snow, it had steadier power on a front plow, and was easier to control in winter conditions. The operator could set the steering to keep the front axle where it could provide the best traction and the rear in the best position for optimum power behind the load, and he could blade in reverse under full power and control.

It was also the first motor grader with fully hydraulic blade control rather than mechanical or manual controls. The hydraulics applied consistent power to all blade motions. With very little effort, the operator could precisely manipulate the blade without moving the circle or interrupting forward or reverse motion, making possible such tasks as moving the blade around obstructions without stoppage or spillage. Combined with a wide degree of oscillation of the axles, the 99’s power and controls enabled it to do exceptionally heavy ditching and slope work.

Besides a scarifier, vee snow plow and snow wing, the 99 was offered with a range of other attachments. These included an elevating grader, windrow loader, slopeboard, front blade, rear roller, front or rear disc harrow for roadmixing, and a circle-mounted sweeper.

Austin-Western initially built the 99 with a single rear axle, but later introduced a tandem drive version. The single-axle machines were called Pacers, and the tandems Supers. Several versions of gas- and diesel-powered 99s were offered, with the last being discontinued in 1959, and it and its contemporaries were replaced by the 100 series that was built as late as 1980.