Each of the 500 Dongfeng Special Vehicle trucks will be powered by a 30 kW fuel cell engine and Ballard FCvelocity-9SSL proton exchange membrane (PEM) fuel cell stacks. 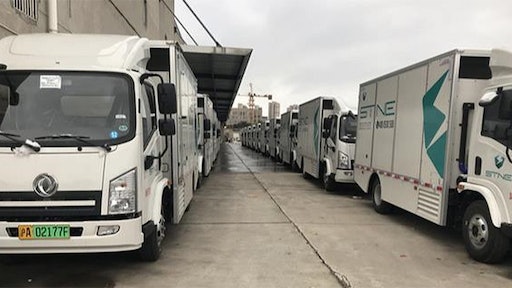 Each box van truck is manufactured by Dongfeng Special Vehicle Co. Ltd., measures 6.4 m (21 ft.) in length, can carry a load of 3.2 tons, and has an expected range of more than 330 km (205 mi.). The trucks will be operated by Shanghai Sinotran New Energy Automobile Operation Co., Ltd., a newly established fuel cell electric vehicle operator, and are expected to be used primarily for intra-city deliveries of goods.

Ballard and Re-Fire have entered into a collaboration agreement under which Re-Fire has agreed to use Ballard-designed fuel cell stacks in its fuel cell engines. Ballard's FCvelocity-9SSL stacks are now being manufactured and are available from Guangdong Synergy Ballard Hydrogen Power Co., Ltd., Ballard's joint venture in Yunfu, Guangdong Province.

"Re-Fire has developed a leading position as a system integrator in the fast-moving Chinese fuel cell transportation market," says Randy MacEwen, Ballard President and CEO. "We are pleased to be collaborating with Re-Fire as we drive market adoption of fuel cell electric vehicles – or FCEVs – incorporating Ballard fuel cell technology. We believe this is the largest planned deployment of fuel cell-powered trucks anywhere in the world. It is not surprising that this is happening in Shanghai given that city's leadership in the commercial adoption of FCEVs."

Lin concludes, "With the integration work completed in late-2017, and all 500 commercial trucks having received green license plates for new energy vehicles in Shanghai, we are now preparing for vehicle launch. We expect to deploy all 500 trucks in 2018, subject to parallel activities, including appropriate scaling of fueling infrastructure and our service platform."

Two recently-constructed hydrogen refueling stations are currently operating in Shanghai, with two additional stations planned for completion in the first half of 2018. As per the "Shanghai Fuel Cell Vehicle Development Plan", a total of 5-10 hydrogen fueling stations are planned by 2020.

China is forecasted to account for approximately 42% of global production of medium- and heavy-duty trucks in 2020, or approximately 1.1 million units, according to LMC Automotive.