The E-DEUTZ modular system offers a combination of conventional and electric drive components to help increase efficiency and lower both overall running costs and emissions. 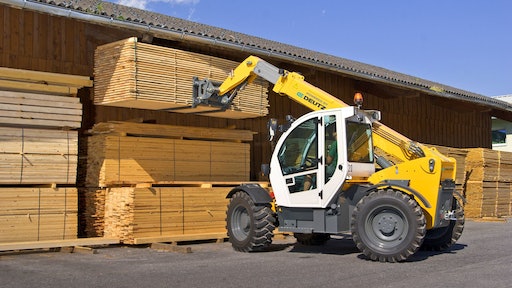 So as to provide a real-life illustration of how its e-drives perform in practice, DEUTZ has converted two telescopic handlers, one to a hybrid drive and the other to an all- electric drive.

As part of the ELECTRIP Event Week in Cologne between September 15 and 21, DEUTZ will for the first time be demonstrating the hybrid and full-electric drives from its new E- DEUTZ portfolio under real-life operating conditions. Customers, investors, media representatives and politicians will all have an opportunity to take electric-powered boats and construction equipment for test drives. It was in September 2017 with its acquisition of Torqeedo GmbH – the global market leader and system solution specialist for integrated electric and hybrid drives for boats – that DEUTZ, which specializes in innovative drive systems, embarked upon the electrification of its product range. The new partner’s comprehensive know-how forms the basis for future developments in DEUTZ’s core off- highway business. ELECTRIP is now highlighting both the underlying technology – in the form of series-production proven Torqeedo electric boat engines – and two recently developed E-DEUTZ drive prototypes – in the form of a hybrid and a full-electric telescopic handler.

E-DEUTZ is based on a modular electrification system, allowing customers to choose whatever is the optimum combination of conventional and electric drive components for their particular application. In terms of power output and capacity, every single E-DEUTZ component is scalable. The aim is to achieve a significant increase in efficiency which will reduce overall running costs, fuel consumption and emissions in equal measure. The first positive results from this modular system – a demonstration hybrid drive, consisting of a diesel engine and an electric motor with power electronics and a battery pack to match – were presented by DEUTZ at the Intermat construction equipment trade fair held in Paris in April 2018.

So as to provide a real-life illustration of how its e-drives perform in practice, DEUTZ has now taken upon itself to produce two demonstrator vehicles. Two Liebherr TL 432-7 telescopic handlers which are normally powered by a 74 kW DEUTZ TCD 3.6 diesel engine were converted, one to a hybrid drive and the other to an full-electric drive, at the DEUTZ Development Plant in Cologne.

As Dr. Frank Hiller, Chairman of the DEUTZ Board of Management explains: “An interdisciplinary team of Torqeedo and DEUTZ design engineers succeeded in integrating our drive concept into two prototype machines in just 6 months. This shows that we have mastered the technology and are in a position to supply marketable electrification solutions. Demonstrating a fully-working operational system is the best way to prove that we have the expertise.”

To produce the battery-electric hybrid, the E-DEUTZ team first ‘downsized’ the combustion engine to a 56 kW DEUTZ TCD 2.2, supplementing it with a 48V 20 kW electric motor, thus giving the system a power output of 76 kW. The mechanical connection between the e-motor and the diesel engine is achieved by means of a transmission with integrated decoupler, which allows the diesel engine to be disconnected from the electrical system and provides the option of powering the vehicle purely by electricity. The energy required is generated by raising the diesel engine’s load point and storing the energy in a 10 kWh capacity battery. The potential savings are dependent on the load cycle and the operating period of the respective application. In this typical telescopic handler application, it was possible to achieve a fuel saving of up to 15%, meaning that the investment will pay for itself within the first 2 years.

The full-electric demonstrator’s drive is powered by a 360 volt system voltage, its diesel engine being completely replaced by a 60 kW electric motor. To ensure that the drive is constantly supplied with sufficient energy, the E-DEUTZ experts have equipped the telescopic handler with a correspondingly powerful battery; with its 30.5 kWh capacity, even lengthy periods of use at high load present no problems. The full-electric E-DEUTZ drive operates with zero local emissions, making it particularly attractive in conurbations where air pollution is often a major issue. In addition to the complete elimination of exhaust gases, it also significantly reduces noise pollution.

Both the demonstrators being exhibited are fully-functional and, in terms of performance, are in no respect inferior to the original diesel-powered model. This means that DEUTZ, together with its new partner, Torqeedo, has very quickly and successfully transferred its e- technology know-how to its core off-highway business. Both telescopic handlers demonstrate perfectly the flexibility offered by the E-DEUTZ modular system.

As Michael Wellenzohn, member of the Board of Management of DEUTZ AG for Sales, Service & Marketing, explains: “We foresee particularly strong potential for installing hybrid and full-electric drives in small and medium-sized equipment. From illustrative Total Cost of Ownership (TCO) calculations, it is possible to see the period over which a hybrid drive, for example, in a particular application will cover its investment cost. Depending on the customer application, this can be after as little as one year of use. In 2022/2023, DEUTZ plans to achieve between 5 and 10% of its overall sales revenue from electrified drives.”