The New York City Department of Sanitation received the award for its GHG emissions reduction efforts, which include use of a Mack LR Electric refuse truck. 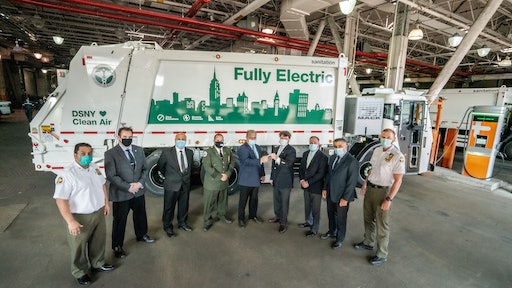 The New York City Department of Sanitation (DSNY) recently received the CALSTART Blue Sky Award for its greenhouse gas (GHG) reduction goals, part of which will be realized through the utilization of the Mack LR Electric model for refuse pickup.

“Mack congratulates DSNY on its recognition by CALSTART for its emobility efforts and for its consistent plans to implement new technologies to help reduce emissions,” said Jonathan Randall, Mack Trucks Senior Vice President of Sales and Commercial Operations. “We are proud that the Mack LR Electric will help them achieve their ambitious goals.”

DSNY accepted the keys to the Mack LR Electric demonstration model in September, when it began rigorous real-world testing in New York City, the world’s largest municipal sanitation department with more than 6,000 vehicles collecting 12,000 tons of refuse and recyclables each day.

CALSTART is a nonprofit organization working nationally and internationally with businesses and governments to develop clean, efficient transportation solutions. CALSTART provides services and consulting to spur advanced transportation technologies, fuels, systems and the companies that make them.

“We fully intend to work toward reducing GHG emissions by 80% by the year 2035,” said Rocco DiRico, deputy commissioner for Support Services at the New York City Department of Sanitation. “One way in which we hope to accomplish this is by testing the fully electric 72,000 lb. Mack LR Electric rear loader in the DSNY fleet. With the support of Acting Commissioner Edward Grayson and the men and women of DSNY, we aim to lead the country in its quest for a carbon-free fleet.”

The Mack LR Electric demonstration model, featuring a copper-colored Bulldog hood ornament, will be based out of the DSNY Brooklyn North 1 garage, where inservice trials will be conducted on local collection routes, evaluating operating range, payload capacity, regenerative braking and overall functionality of the electric refuse vehicle in their operations.

Mack recently announced that they would begin commercialization in Q1 2021 of the Mack LR Electric model at Lehigh Valley Operations in Macungie, PA, where all Class 8 models for North America and refuse are assembled.

The Volvo LIGHTS project is providing insights into what it takes to add electric vehicles to a truck fleet and how they will operate in real-world conditions.
Sara Jensen
March 30, 2021

Meritor will begin production of its Blue Horizon 14Xe integrated ePowertrain in mid-2021, as well as supply it to several OEMs for use in their electric commercial vehicles.
Meritor, Inc.
February 3, 2021

The company is providing its manufacturing expertise to help with the acceleration of battery-electric commercial vehicles.
Sara Jensen
February 2, 2021
Follow Us