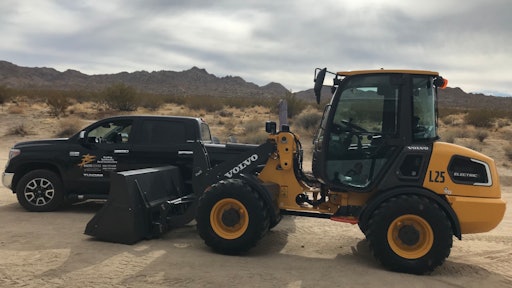 Electric car sales are increasing every year, more and more cities are using electric buses, and the first generation of electric trucks is hitting the highways — when it comes to electromobility, a lot of the early progress has been seen on the roads.

But quietly in the background, electric vehicles (EVs) have been heading off the road and onto construction jobsites. The construction industry has a key role to play in decarbonization efforts. The buildings and construction sectors combine to account for 38% of carbon dioxide emissions worldwide, according to a United Nations report.

“After on-road trucks, off-road equipment is the second-largest source of nitrogen oxide pollution in our region,” says Ben Benoit, chair of the South Coast Air Quality Management District, which is responsible for improving air quality in an area around Los Angeles that’s home to 17 million people. “Our next big focus is construction equipment, and we're really looking forward to seeing some of the successes in electromobility.”

Heavy equipment like excavators and wheel loaders are just now becoming available in electric options, and as with the transportation sector, EVs are ushering in a new era.

“Electric machines are going to build the roads, bridges and utility lines of tomorrow, and they’re going to do it without producing greenhouse gas emissions,” says Dr. Ray Gallant, Head of Product Management and Productivity, Volvo Construction Equipment (Volvo CE). “There are already early adopters successfully using electric construction equipment, and they’re finding that they can lower their carbon footprint while keeping their performance high.”

“We’ve come a long way in the last few years on reducing harmful emissions from our machines,” Gallant says. “Although there are still improvements possible in diesel combustion technology that we will continue to pursue, I think we’re at a point where most of the benefits have been realized. New technologies like electric machines are the next frontier in emissions’ reductions.”

The push for sustainability is also coming from the public and private sectors. Governments worldwide are adopting more clean-air regulations at local and regional levels. Also, many companies are adopting sustainability policies, and they’re asking their partners to help them meet their targets. Sustainability requirements are already showing up in project specifications, and construction contractors should expect that trend to continue to grow.

“Clearly there are huge world impacts with electromobility, but we also need to remember the local impacts,” Benoit says. “A type of pollution that comes from vehicle exhaust is a precursor to lung and heart diseases. So it’s important that we tackle this problem for our local residents, in addition to the overall world issue.”

Charging and Fleet Performance Are Key

The Volvo ECR25 Electric excavator and L25 Electric wheel loader, which are already available to buy in select markets and will be commercially available in the U.S. this year, run on lithium-ion batteries and can be charged using a 220/240V electrical socket, which is the type of outlet many larger home appliances use. They also come with fast-charge options that can get them close to peak charge within a couple of hours. Research and development are moving fast in this area, and in the near future options like mobile power banks could be available for charging in remote locations.

There’s charging a unit, and then there’s a machine’s ability to keep a charge. Construction projects are usually time sensitive, and crews may work long stretches. That’s one reason Volvo CE started with smaller machines. Compact excavators and wheel loaders are more commonly used in light applications, like utility work, landscaping and agriculture. Their batteries hold enough energy to allow them to perform a typical day’s work. The next step for the industry will be electrifying medium and large machines. Already efforts are underway in this area as illustrated with the 22-tonne EC230 prototype electric excavator.

This ties into performance. Something that will slow adoption of electric machines is either the reality or the perception that they do not perform as well as their diesel counterparts. When it comes to Volvo CE machines, performance is not an issue. In fact, the ECR25 Electric excavator and L25 Electric wheel loader have nearly identical specifications to their diesel equivalents.

“Our customers will not notice a difference between the power and performance of the electric machines versus the diesel models,” says Lars Arnold, Volvo CE Electromobility Product Manager. “In fact, they’ll enjoy several benefits with the electric machines thanks to the lack of a diesel engine, including lower noise, less machine vibration and no exhaust fumes.”

This is not theoretical. In real-world use, the machines are meeting the high expectations of contractors.

Baltic Sands Inc., which specializes in environmentally sensitive, luxury property development and real estate, has been using an electric excavator and wheel loader on Southern California projects over the past several months as part of a pilot with Volvo CE.

“My opinion is that they perform equally to diesel machines in terms of the productivity. It’s surprised me,” says Jacques Marais, Director, Baltic Sands. “They also support our ideology of being eco-friendly and responsible. We like to think that we are ahead of the evolutionary step in this direction.”

The South Coast Air Quality Management District, which has a long history of supporting the development of innovative solutions, put $2 million toward the pilot project.

“This is a great opportunity to see electric excavators and wheel loaders in real-world applications,” Benoit says. “It’s also an opportunity to further develop the charging systems. These are all important pieces to that puzzle to help figure out how to deploy this technology.”

Volvo CE plans to release results of the pilot project this summer.

Also, advances in electric construction equipment can help other EVs, and vice versa. Volvo Group recently created a new business unit to support innovation in batteries and charging infrastructure. Volvo Trucks is leading the trucking industry into electromobility, and their learnings benefit construction equipment too. The same is true of Volvo Buses, whose electric buses are reducing emissions and noise in cities.

The societal impact of these advancements should be significant. Climate change is a threat to our health, the spaces where we live and our livelihoods. With the construction industry responsible for a significant portion of the world’s greenhouse gas emissions, it has an obligation to bring forth solutions.

“The construction industry is on the cusp of a major transformation,” Gallant says, “and in turn, it will have a major effect on the entire world.”