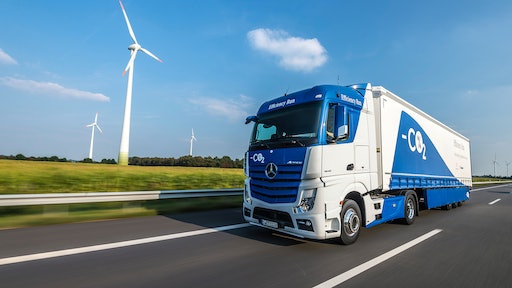 The new year marks the beginning of a new era for the European commercial vehicle industry. As of January 1, 2019, truck manufacturers will hand over to their customers in Europe every newly produced truck of certain classes together with a certificate containing information on fuel consumption and carbon dioxide (CO2)  emissions. In practice, Daimler Trucks will communicate these values to its customers during the offer process. Truck buyers have always been very interested in low fuel consumption for their vehicles, as it has a positive impact on their total cost of ownership (TCO). This goes hand in hand with lower CO2 emissions. The figures are calculated individually for each truck configuration using the digital simulation tool VECTO (Vehicle Energy Consumption Calculation Tool). The EU Commission has developed the software, including uniform test and measurement procedures, in cooperation with manufacturers, scientists and other experts. For the first time, truck customers in the EU are now able to objectively compare the fuel consumption and CO2 emissions of vehicles from different suppliers.

Daimler Trucks completed the first certification runs well before the legal regulation comes into force and has been introducing the certificates since November until the cut-off date. Since then, the world’s leading truck manufacturer has handed over well over 1,000 Mercedes-Benz Actros vehicles with certificates to customers.

Stefan Buchner, Head of Mercedes-Benz Trucks, says, “We expressly welcome the new regulations for measuring the fuel consumption and CO2 emissions of heavy commercial vehicles. We see VECTO as an important prerequisite for an even more sustainable transport system and better market transparency. We share the EU’s goal of using VECTO to create transparency on ever lower fuel consumption and further reductions in CO2 emissions. Customers and the environment will benefit equally from it in the long term.”

“We have always been committed to reducing fuel consumption and CO2 emissions. According to Dekra, we already reduced the actual fuel consumption of heavy-duty Mercedes-Benz trucks and thus also their CO2 emissions by 22% between 1996 and 2016 alone – despite drastically stricter emission standards. And the fuel consumption of our new Mercedes-Benz Actros, which we presented in September 2018, is once again lower than that of its predecessor, achieving savings of up to three percent on highways and actually up to five percent on country roads. But even the optimization of diesel technology, which is being pursued with the greatest efforts, is increasingly reaching its physical and technical limits despite further efficiency gains. The current proposals on reducing trucks’ CO2 emissions that are being discussed in the EU go far beyond what is technically and economically feasible and set the wrong priorities,” continues Buchner.

VECTO as an element of the EU’s CO2-reduction targets

As of base year 2019, VECTO data will also be used as the reference figures for the EU’s future CO2-reduction targets. This basis and the targets have not yet been established. In May 2018, the EU Commission proposed to reduce CO2 emissions by 15% by 2025 and by 30% by 2030 (each related to base year 2019). This represents a tripling to quadrupling of the continuous reduction in fuel consumption and CO2 emissions achieved so far on average each year. In November, the European Parliament voted on a draft of these proposals as modified by its Environment Committee and voted for a CO2 reduction of 20% by 2025 and at least 35% by 2030. From Daimler Trucks’ point of view, an improvement in CO2 reductions of approximately 1.5% per year over the next 10 years would be ambitious but still realistic. Daimler is now counting on the decision of the member states and thus on the meeting of the Council of the European Union (EU Council of Ministers) on December 20, 2018 as the next step in the legislative process.

By the starting date of January 1, 2019, the legal stipulations relating to VECTO, which are based on Regulation 2017/2400 of the EU Commission of 2017, will already affect a significant proportion of the trucks manufactured in the EU: two-axle and three-axle semi-trailer and flatbed chassis for long-distance and regional transport, i.e. truck classes 4, 5, 9 and 10 (trucks over 16 tons). At the beginning of 2020, the EU regulation will also include light delivery vehicles over 7.5 tons. According to experts, vehicles in the 5-7.5 ton weight class and buses are also expected to follow a little later.

The first step is that manufacturers must generate the required input data for the VECTO calculations on factors affecting fuel consumption, according to strict instructions and supported by external testing organizations. For example, the drag coefficient (wind resistance) of different cab variants of a truck model is measured. In addition, the different fuel consumption and thus CO2 emissions depending on the engine, transmission or axle variants must also be determined for VECTO. The resulting input data, as confirmed by independent testing organizations, is then fed into the VECTO simulation. This then calculates the corresponding fuel consumption and CO2 emissions for specific truck configurations required by manufacturers for their customers, taking driving cycles into account.

VECTO figures are based on standard situations

The VECTO figures are simulated with a standard transport order, standard route profile and standard body (box truck). Not all driving, loading and operational situations can be simulated. Depending on the type of operation (long-distance traffic, city deliveries or off-road construction site), vehicle weight and load or route profile, trucks sometimes consume quite different amounts of fuel. Neither does VECTO take into account special vehicle variants such as open dump trucks or garbage trucks, which sometimes also consume quite different amounts of fuel than trucks with the standard body. Real values can therefore deviate from those calculated with VECTO.

Numerous fuel-reducing systems are not considered in VECTO

Furthermore, the current version of the VECTO software does not yet take into account some systems that have further positive effects on fuel consumption and thus on CO2 emissions in real operations with customers. They include predictive cruise control, improvements to trailers and/or bodywork, start-stop functions and efficient route planning. Another factor is that bodies and trailers are currently only included using a standard configuration. Daimler therefore aims to ensure that VECTO takes into account all fuel-saving and thus CO2-reducing methods that are already available today. Due to these weaknesses of VECTO, professional customer advice on vehicle efficiency will continue to play a key role for Daimler in the future.