An OEM has specially configured a piece of drilling equipment for use in Antarctica. 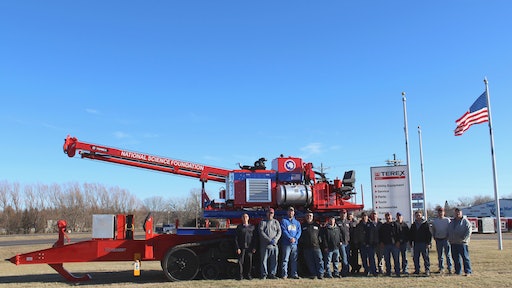 Terex Utilities recently developed a drill for use in Antarctica by the National Science Foundation (NFS). The Model 330 Auger Drill was designed to meet the specific needs of the science field team of the U.S. Antarctic Program.

NFS will use the machine to drill 48 in. (121.9 cm) diameter holes up to 20 ft. (6.1 m) deep through the sea ice. The auger drill will support projects requiring access to the ocean using the sea ice as a platform.

The drill is a direct replacement of an existing machine being used by the U.S. Antarctic Program personnel; because it is the same drill model as the existing piece of equipment, the new Model 330 includes many of the solutions initially developed for the customer, says Gary Rice, South Region Sales Manager at Terex Utilities.

Enabling use in the cold

One of the key design requirements for the Model 330 Auger Drill is having the ability to perform in temperatures as low as -45 F (-42.8 C). Ensuring heat retention was a major design goal because of this, says Rice. “In typical applications, heat in a hydraulic system is considered the enemy,” he explains. “However, the opposite is true in this cold weather application.”

By using the simplest hydraulic system possible to run the peripheral components, heat retention can be better achieved. “We employed full pressure hydraulics where possible with lever controls and kept hose lengths as short as possible to not lose heat from the system,” Rice explains.

In addition, special valves were added to the drill’s transmission to divert fluid in a loop to the transmission instead of running transmission fluid through a heat exchanger. This enables retention of as much heat a possible in the extreme cold weather environment. A portion of the fluid is passed to the heat exchanger only once it has reached the appropriate operating temperature.

The company worked closely with its customer to review specifications for the machine design and understand the performance demanded by the conditions in which it would be working. Terex also worked closely with component suppliers to identify appropriate specifications of the pats being supplied to ensure their use in harsh conditions. Specified items from suppliers included cold-weather seals, a cold-weather engine enclosure with shutters, on-board hydraulic heater, cold-weather batteries and battery heaters, as well as cold-weather fluids and charging system, and centralized wiring for all heaters. “We also installed an on-board battery charger to provide backup charging capabilities and replaced the hydraulic system with full pressure controls,” says Rice.

He explains that because cold temperatures adversely affect a battery’s cranking power, inclusion of the battery charger and battery heaters helps maintain cranking power to allow the engine to start in cold weather.

Further modifications for insulation and heating include use of hydraulic tank heaters and oil temperature-controlled radiator on the engine to help it warm up for operation as part of a pre-start system. “All engine enclosures were insulated, and a heated wrap encases the batteries,” says Rice.

For the engine power the auger, Terex chose a Tier 3 Caterpillar engine to help meet the customer’s specification for the use of AN8 fuel which is suitable for operation in -45 F temperatures. Rice says fuel injectors designed for use with AN8 fuel were added to the engine. A 12V 3 kW (4 hp) high amp starter, engine block heater and battery warmers were also added to ensure its operation in the cold temperatures of Antarctica.

The ability to travel over uneven, icy terrain was also an important aspect for Terex to consider when designing the auger drill. Because of this, and the need for it to access remote areas, the Model 330 is mounted on a crawler trailer towed behind a Snowcat-style vehicle. Typically this type of machine is mounted on a truck or self-propelled crawler-track carrier. However, by mounting it on a trailer it is better able to traverse uneven terrain and deep fissures in the ice commonly found in the operating environment.

According to Rice, trailer mounting offers a lower center of gravity which provides better stability while traversing the rugged terrain. “A carefully balanced mounting configuration is required to allow transporting the equipment over the rugged Antarctic terrain,” adds Rice. “We worked closely with the supplier of the crawler trailer to ensure our equipment would fit precisely where needed to optimize weight and balance, and ensure adequate clearances were provided for the tracks on the trailer.”

In addition, he says the trailer-mount configuration eliminates one more engine to maintain and start in cold weather.

The Model 330 Auger Drill has been delivered to the customer in Antarctica and readied for operation. As it does with all of its products in any part of the world, Rice says Terex has provided full in-service training—teaching proper maintenance and service intervals—as well as fully trained equipment operators on how to properly use the machine to maximize productivity and product life cycle.

The O Series is for clean liquid; G Series handles most applications.
Gorman-Rupp Company
May 18, 2022
Follow Us