To find a better way of compacting beyond converted tractors, purpose-built heavy-duty compactors were created. 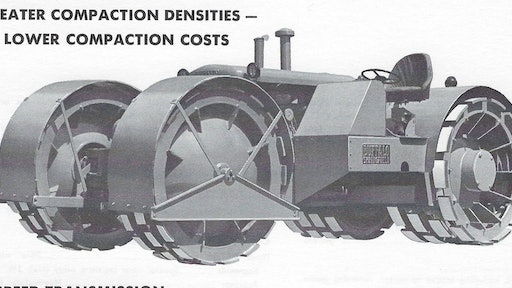 Although the rubber-tired tractors that were adapted for pulling compactors or converted altogether offered advantages over sheepsfoot rollers drawn by crawler tractors, there was still a need to find a better way of compacting fill. A major step in that direction was taken in 1954 when The Buffalo-Springfield Roller Company introduced the K-45 Kompactor, a machine unlike anything else on the market.

The K-45 was the world’s first purpose-built, self-propelled, heavy-duty compactor for soil work. Essentially, it was a large, diesel-powered tractor with compaction wheels in place of tires. It was much more easily reversible and more stable on slopes than tractor-drawn compactors, and it eliminated much of the manual work with rammers or backfill tampers because the design of its wheels allowed it to work close to abutments, culverts and other obstructions.

But, the wheels themselves and the principal by which they compacted were what set the K-45 apart from other compactors. A sheepsfoot roller used an array of spikes arranged around the drum to compact by penetrating the soil, and three-wheel and other smooth rollers compacted by dead weight. In contrast, the K-45’s four wheels were segmented. Each wheel consisted of parallel rings, three in front and four in back, with gaps between each of the steel plates that formed the surface that contacted the ground and between the rings themselves. These plates entered loose material with minimal disruption and pulled free without disturbing the surface, sending all the compaction force downward through multiple layers of soil, rather than dissipating it to the sides or in the direction of travel. Because of this, the K-45 could achieve density in just two passes, as opposed to as many as eight with other types of soil compactors, with superior uniformity and all the attendant cost savings.

The K-45’s only real drawbacks were that it did not have a blade for spreading material, and it did not provide ground contact across the full width of the machine. Pactor Corporation of West Sacramento, CA, addressed these issues with their Pactor line in the early 1960s. The Pactors had a three-wheel design, just like three-wheeled rollers, that did provide full-width compaction, and a small dozer blade. They were also more maneuverable than the K-45, through their articulated frames. No other manufacturers offered three-wheel design, but the adoption of dozers and articulation as industry standards by Buffalo-Springfield and other manufacturers, rendered the K-45 obsolete. For its part, the descendant of the Pactor, the RexPactor soil compactor, is offered today by C. M. I. Roadbuilding.