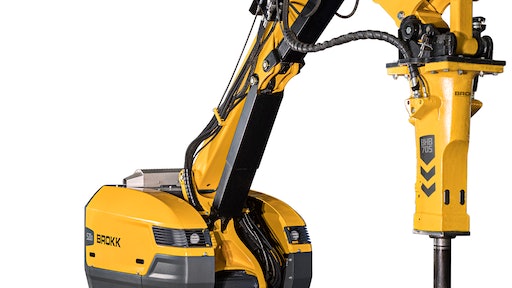 Brokk, the world’s leading manufacturer of remote-controlled demolition machines, welcomes the Brokk 520D to its extensive product lineup. Meeting both Tier 4 Final and European’s Stage IV emission standards, the new machine is the most eco-friendly diesel demolition robot on the market. The 520D replaces the Brokk 400D, one of the first diesel models released, and comes equipped with Brokk’s signature SmartConcept technology, boasting 40% more hitting power.

The Brokk 520D is one of four new next generation Brokk remote-controlled demolition machines Brokk highlighted at World of Concrete 2019 in Las Vegas.

“Demand for diesel-powered machines has grown in recent years, especially from construction and demolition contractors who often need the extra power diesel-fueled machines can provide,” says Martin Krupicka, Brokk Group CEO. “With a power increase and design enhancements, the Brokk 520D provides a power-packed solution that retains a relatively small footprint for its hitting force.”

The Brokk 520D is the only diesel model out of the company’s four new next generation remote-controlled demolition machines. Like the other next generation models, the 520D features Brokk’s new SmartConcept system, including the SmartDesign and SmartRemote. SmartDesign extends machine life and provides unprecedented ease of maintenance due to 70% fewer cables as well as hardened components, LED headlights and easily accessible grease points and hydraulic hoses. An ergonomic remote-control box, the SmartRemote, incorporates adjustable straps, intuitive controls and professional-grade radio technology with a 984-ft. (300 m) working range.

The NBT60XL features a hydraulically removeable counterweight configurable from 0-16,000 lbs., allowing it to take on much heavier picks.
The Manitowoc Company, Inc.
October 6, 2020

The new RGP range of mini cranes is designed to work indoors and out, and is capable of operating on flat or uneven terrain.
Palazzani Industrie S.p.A.
September 29, 2020

Updates to the company's excavator line, including a brand new model, will be available in 2021.
Kubota Tractor Corp.
September 24, 2020

The 216MRail excavator is purpose-built to be compact for enhanced agility, safety and operator visibility.
Mecalac France S.A.S.
September 23, 2020

The telescopic loader can navigate in confined spaces and offers the advantages of a loader, telehandler and industrial forklift combined in one machine.
Manitou Group
September 14, 2020

Integrated sensors and Automated Blade Assist are among the features included on the D9 dozer which help to improve productivity for operators.
Caterpillar Inc.
September 8, 2020

The first Volta Zero pilot fleet vehicles will start trials with Europe’s largest logistics operators in the first half of 2021, with the start of production scheduled for 2022.
September 7, 2020

Up to a 10% reduction in fuel consumption can be achieved with the use of Auto Mode which adapts the engine speed to the load.
Caterpillar Inc.
September 1, 2020

The E-Dumpster is powered by a 48V lithium-ion battery pack that can be recharged using a standard 240V or 110V electrical suppl
JCB North America
August 27, 2020