Capstone Turbine Corp. has completed testing of a Kenworth Class 7 hybrid electric work truck using its 65 kW microturbine as an on-board range extender, confirming both high-speed performance as well as operation on 20% grades. 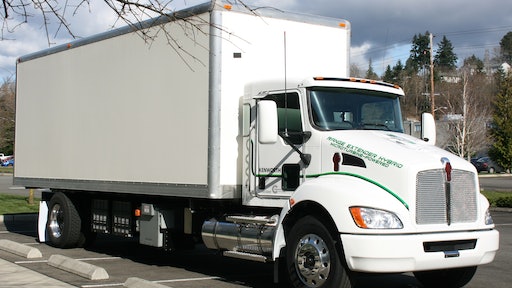 “The objective of this program is to demonstrate the considerable fuel economy benefits, lower emissions and significant reduction in greenhouse gas emissions of a microturbine-powered delivery or work vehicle. Electric vehicles are excellent for the environment, but the ability to save money from improvements in fuel economy is critical to making these vehicles both sustainable and cost-effective. Working with Kenworth has been very beneficial for Capstone to further develop our technical and market expertise in applying our technology to hybrid electric vehicles,” adds Jamison.

The Kenworth Class 7 work truck features a Capstone C65 microturbine that is installed onboard and operates on compressed natural gas. The microturbine acts as a range extender to charge an onboard 47 kWh Li-Ion battery pack, which in turn provides power to the electric traction motors that propel the truck. The truck is fitted with a refrigerated box body that uses electric power to provide payload cooling while on the road, thereby eliminating the need to operate a separate diesel engine generator set with its associated fuel consumption and additional emissions. The drivetrain is sized for urban delivery cycles but is capable of achieving significant highway speeds as well.

Capstone has developed simulations to compare a microturbine-powered hybrid electric vehicle’s fuel economy, NOx and CO2 emissions to a conventional diesel-powered truck drivetrain operating on city and rural delivery cycles. Simulated results for low-mileage urban delivery routes indicate diesel equivalent truck miles-per-gallon could be as much as three times higher for the microturbine hybrid, with a corresponding reduction in greenhouse gas of 65% and a reduction of NOx by more than 90%. Capstone plans to begin customer demonstration testing later this year as well as additional drive cycle testing to confirm predicted performance.

“Electric vehicles are gaining market traction in buses, automobiles and heavy duty trucks, and programs like this allow Capstone to maintain its leadership position in the application of microturbines in the growing electric vehicle industry,” says Jim Crouse, Capstone’s Executive Vice President of Sales and Marketing. “With recent announcements from major manufacturers such as Tesla and Cummins that underscore the industry’s growing acceptance of heavy-duty electric drivetrains, Capstone intends to be an active participant in this emerging technology shift.”