Nova Bus will provide 20 of its LFS Natural Gas buses to the Niagara Frontier Transportation Authority, with an option to provide more over the next five years. 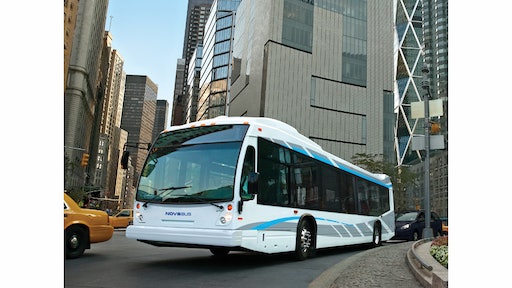 Nova Bus has confirmed an $11 million contract with Niagara Frontier Transportation Authority (NFTA) for 20 LFS Natural Gas buses, with options for up to 166 buses over the following five years. Buses will run in the streets of the Buffalo Niagara region starting in early 2016.

NFTA plans to use the new Nova LFS Natural Gas to replace vehicles that were purchased between 1996 and 2000 and have exceeded their useful lives. NFTA oversees public transportation in Erie and Niagara counties in New York State and contributes to quality of life improvements in the Buffalo Niagara region, such as smart mobility.

"Renewing our partnership with NFTA is a welcome opportunity to strengthen our presence in the State of New York,” says Jean-Pierre Baracat, President of Nova Bus. “Nova Bus is celebrating the fifth anniversary of its Plattsburgh plant this year and we are thrilled to sign a new contract with fellow New Yorkers NFTA."

Kimberley A. Minkel, NFTA Executive Director says, “We are very much looking forward to the arrival of our CNG buses as part of our continuing Going Green initiative. They will substantially reduce our carbon footprint and provide welcome operating efficiencies for our Metro fleet.”

The new vehicles also feature an advanced hePEX tubing system designed to replace the traditional copper tubes of heating systems. HePEX tubes and connectors have been widely used in Volvo buses and trucks for years. They reduce vehicle weight and simplify maintenance since there is no welding or bonding involved. Buses also feature a rooftop catwalk, designed to facilitate maintenance and inspection.