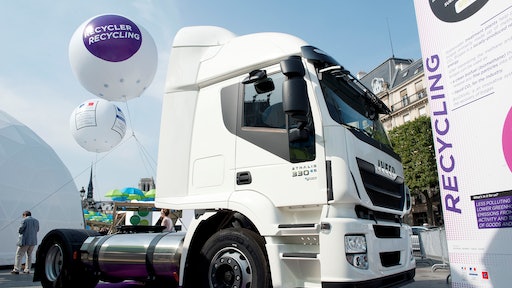 An Iveco Stralis LNG truck, part of the BIOGNVAL project in collaboration with Suez and GNVert. This vehicle will soon be powered by liquefied biomethane.

The United Nations' 2015 Paris Climate Conference, also known as COP 21 (Conference of Parties) came to a close on Friday, December 11. This edition of the annual convention worked to achieve a legally binding and universal agreement on climate, with the aim of keeping global warming below 2 C.

Global agricultural machinery brand New Holland Agriculture was a Gold Sponsor of the Sustainable Innovation Forum (SIF) for the fifth consecutive year. The forum is organized by Climate Action in partnership with the United Nations Environment Program (UNEP). The brand showcased its T7 Blue Power tractor in front of the SIF venue and was represented by Lars Skjoldager Sorensen, Head of Harvesting Product Management at New Holland Agriculture, on a speaker's panel for a high-level dialogue session devoted to Sustainable Agriculture, Forestry and Water Use.

The discussion revolved around the most promising innovations in food production and land management that will enable society to support a global population of over nine billion. Sorensen pointed out that "the path to a sustainable future for agriculture is also linked to alternative sources of energy and a transition to greater energy independence for farming businesses." He went on to illustrate how New Holland Agriculture is doing its part to forge ahead in the field of sustainable agriculture through technological innovations such as Precision Land Management (PLM). PLM provides operators with tools such as mapping and guidance to help farmers to increase the productivity of every inch of their field and thereby enabling them to efficiently manage their equipment, their land, labour and inputs in all phases of the crop production cycle.

Fourteen of the vehicles presented were Iveco Stralis heavy trucks, 12 of which were powered by biomethane, CNG and LNG. They performed a range of tasks from deliveries to supermarkets in Paris to collecting COP 21 paper materials for recycling. These trucks demonstrated the immediate potential for transitioning to cleaner energy for the road transportation of goods.

The Iveco Bus models, a 16-seater Daily electric minibus and two Magelys coaches, were made available to the state-owned Parisian public transport operator RATP (Regie Autonome des Transports Parisiens) for transporting delegations and officials attending the COP 21 summit. Further to this, Iveco Bus and Heuliez Bus, also a brand of CNH Industrial, took part in the "Bus 2025 - Let's invent the bus of tomorrow" event. For this, an Iveco Bus Crossway Line vehicle which runs on HVO (Hydrogenated Vegetable Oil), an Iveco Bus Daily electric minibus and the new ELEC GX fully electric bus from Heuliez Bus were presented to an audience of transport professionals and public authorities, which included Anne Hidalgo, Mayor of Paris, Elisabeth Borne, President & General Director of RATP and Jean-Paul Huchon, President of the transport organization authority STIF (Syndicat des Transports d'Ile-de-France). Many COP 21 visitors using public transport would have also had the chance to travel on one of the 140 Heuliez Bus hybrid vehicles that are already in operation in greater Paris.

The CDP, the international not-for-profit organization that provides the only global system for companies and cities to measure, disclose, manage and share essential environmental information, profiled CNH Industrial through its 'Commit to Action' campaign at the United Nations' Paris Climate Conference. In November, the company was once again acknowledged as a global leader for its actions and strategies in fighting climate change, being included in the CDP's Climate "A" List. CNH Industrial also earned a score of 100/100 for the transparent communication of its actions to fight climate change.