Volvo has begun testing its concept truck featuring a hybrid powertrain which will help to reduce carbon dioxide and fuel consumption by 30%. 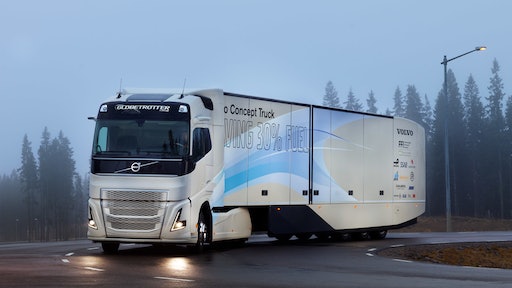 With the Volvo Concept Truck, Volvo Trucks has developed its first hybrid vehicle designed for long haul applications. In combination with the vehicle’s other improvements, the total reduction in fuel consumption and CO2 is around 30%.

Volvo Trucks first unveiled the Volvo Concept Truck in May 2016, and has now developed and enhanced the vehicle even further. In addition to the improvements in aerodynamics, rolling resistance and reduced weight, the new version also features a hybrid powertrain – one of the first of its kind for heavy-duty trucks in long-haul applications.

“We strive to be at the forefront of electromobility and to constantly push the limits when it comes to reducing fuel consumption and emissions,” says Claes Nilsson, CEO at Volvo Trucks. “Over the coming years, as society moves more and more towards renewable energy, we strongly believe that electromobility and hybrid technology will become increasingly important. The powertrain in our concept truck has been developed to improve transport efficiency and thereby help the industry towards sustainable transport. With the concept truck we will gain valuable knowledge and experience, which will help us develop the technology further.”

The Volvo Concept Truck is the result of the Swedish part of a bilateral research project involving both the Swedish energy authority Energimyndigheten and the U.S. Department of Energy.

An American Concept Truck, the SuperTruck project, was developed as part of the U.S. Department of Energy’s SuperTruck program, which promotes research and development to improve transport efficiency for long-haul operations in North America.