Themed “For a Better World,” a press event at bauma 2019 featuring Chinese equipment associations and several major OEMs highlighted the goals and opportunities for Chinese manufacturers in the global landscape. 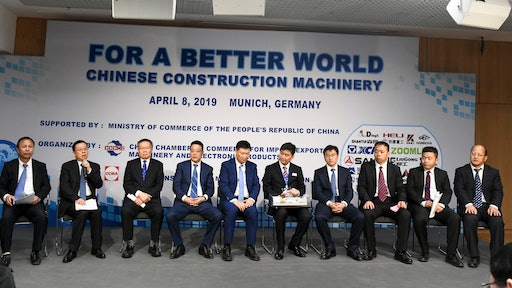 Chinese construction machinery manufacturers gathered together with the China Chamber of Commerce for Import and Export of Machinery and Electronic Products (CCCME) and the China Construction Machinery Association (CCMA) to talk about how China plans to continue to embed itself into the global marketplace.

Over the course of the press conference, the Chinese Belt and Road Initiative (BRI)—an infrastructure strategy announced in 2013 by President Xi Jinping—was referenced several times as a continued means of expanding China’s manufacturing and equipment opportunities on the international stage.

China's global expansion should not just be about products or profit, it should be about what can be brought to the local society.

Shantui Construction Machinery’s President, Zhang Min, asserted that while maintaining the company’s presence in China as well as along the BRI map, it also wanted to build up its North American market presence and “pay close attention to large-scale construction projects in Africa, America and the Middle East.” Zoomlion’s Vice President, Xiong Yanming, highlighted its emphasis on the Southeast Asia and Middle East regions for its BRI development.

There was also a strong emphasis on integrating into local markets, improving competitiveness and focusing on continued technology advancements. XCMG Chairman, Wang Min, spoke on the company’s steadily growing presence in BRI countries by a localized strategy including a commitment to local economic growth and job development.

The theme of “For a Better World” was reflected in several companies’ philanthropic, humanitarian and local community efforts to move beyond being a Chinese company in a different country, but rather a local manufacturer. XCMG’s Liu Jiansen, for example, cited 14 different public welfare programs covering five segments including disaster relief, education, poverty, environmental development and industry support—programs such as water cellar development in Ethiopia for safer drinking water access and mosquito net donations for combating diseases.

Sany Heavy Machinery Ltd.’s chairman, Mr. Yu Hongfu commented that expansion is not just about products or profit, it is about what can be brought to society.

The range included training and diagnostics tools, as well as remanufacturing and support services.
The Manitowoc Company, Inc.
April 29, 2019

The RS20 platform, introduced at bauma 2019, is made up of freely combinable functional sections.
Bosch Rexroth Corporation
April 25, 2019

The new working group was founded in Munich on April 8 to enable machine networking to be carried out in a more structured manner and with all actors involved in the value chain.
April 25, 2019