The basis of this concept was powering each drive axle of a truck or scraper with its own diesel engine and powertrain. 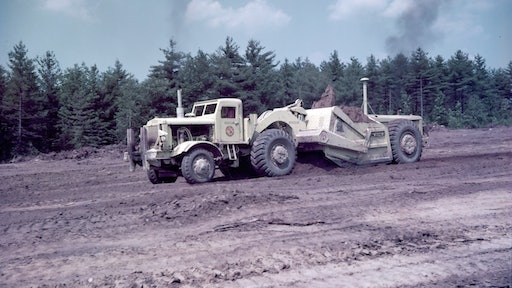 One of the Euclid Road Machinery Company’s major innovations was the twin-power concept. The basis of the concept was powering each drive axle of a truck or scraper with its own diesel engine and powertrain. The idea is believed to have originated with the Koehring Company, which used twin, diesel engines and powertrains to propel a short-lived crawler version of its Dumptor shuttle dump in the 1930s. However, Euclid was the first to use it successfully.

Euclid owed the success of twin power to the development of the Allison Torqmatic transmission in the mid 1940s. The transmission was semiautomatic, with full power shift and a torque converter. These features made it possible to shift instantaneously under full power and load.

Using two engines created a problem in synchronizing the engines, and the torque converter solved this by automatically compensating for minor variations in load on the transmission such as were imparted by two unsynchronized engines. The operator could shift both transmissions simultaneously with a single lever.

After two years of experimentation, the first twin-power machine was an 18-cubic-yard capacity bottom dump truck introduced in 1948. The first twin-power scraper followed in 1949. Both machines had one engine, a transmission in the tractor to power its drive axle, and a second on the back to power the wagon or trailer. This gave them increased capacity and mobility when compared to their single-engine counterparts. The scraper had the additional advantage of not requiring a push tractor for loading except under the most severe conditions.

The twin-power bottom dump was not a big seller. In addition, the twin-power scraper with the original two-axle tractor, as shown in Image 1, was only a little more successful. But Euclid went on to sell thousands of twin-power motor scrapers with a more maneuverable single-axle, overhung tractor. Called the TS series, this design was introduced in 1954, and the last TS-series scraper was built by Terex in the 2000s.

Twin-power was also applied to a line of massive, end dump trucks and the famous TC-12 crawler tractor. The end dump trucks were among the largest available in the 1950s and early 1960s. The TC-12 was the largest and most powerful crawler tractor from its 1955 introduction until Fiat-Allis unveiled the HD41. The TC-12 rode on two frame halves that oscillated against each other on rough ground and could be unbolted for transport. For all its power, it was also the most complicated crawler on the market and was prone to expensive mechanical issues.

The Historical Construction Equipment Association (HCEA) is a 501(c )3 nonprofit organization dedicated to preserving the history of the construction, dredging and surface mining equipment industries. With more than 3,500 members in a dozen countries, our activities include the operation of the National Construction Equipment Museum and archives in Bowling Green, Ohio; publication of a quarterly magazine, Equipment Echoes, from which this text is adapted, and hosting an annual working exhibition of restored construction equipment. Individual memberships are $35.00 within the U.S. and Canada, and $55.00 U.S. elsewhere. Our next International Convention and Old Equipment Exposition will be September 22-24, 2023, in Bowling Green, Ohio. We seek to develop relationships in the equipment manufacturing industry, and we offer a college scholarship for engineering students. Information is available at www.hcea.net, or by calling 419-352-5616 or e-mailing info@hcea.net.

This size is an E4 for low profile dump trucks in underground haulage operations.
BKT USA Inc.
May 12, 2022
Follow Us