Dana Rexroth announced at CONEXPO 2014 its R2 HVT is undergoing bench testing in the final validation stage of development. 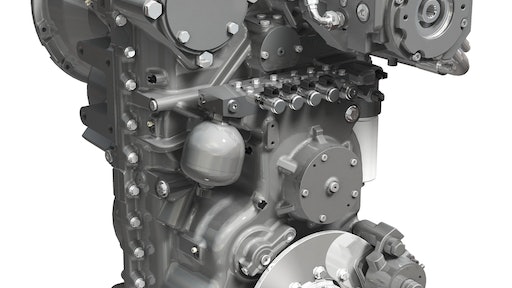 Dana Rexroth Transmission Systems announced at CONEXPO-CON/AGG 2014 that its R2 hydromechanical variable transmission (HVT) is undergoing bench testing in the final validation stage of development. Engineers expect the R2 HVT to enter field testing across a wide spectrum of market vehicles by the end of the year, with production slated to begin within the next 12 months, depending on OEM adoption.
The R2 HVT is a modular platform that delivers a full suite of configuration options and software controls, such as direct or remote mounting, flexibility in shift control and drive strategy parameters, and the deployment of up to three PTOs. It is the latest powersplit system resulting from the 50-50 joint venture between Dana Holding Corporation and Bosch Rexroth AG.
Designed to maximize efficiency and reduce overall vehicle ownership and operating costs, the R2 HVT is ideal for front-end loaders, motor graders, industrial lift trucks, reach stackers, forestry skidders, and other select off-highway applications requiring 180 to 260 hp (135 to 195 kW) of engine output power.
Initial tests on front-end loaders with Dana Rexroth’s HVT powersplit systems demonstrate fuel savings in the drivetrain of up to 25% when compared with the same vehicle outfitted with a conventional torque converter transmission.
“From the beginning, equipment manufacturers have readily recognized the dramatic increases in efficiency that result from combining technologies from Dana and Bosch Rexroth,” says Jeroen Decleer, Managing Director of Dana Rexroth Transmission Systems. “As we enter the final stages of testing and development, OEMs are seeing firsthand the unique benefits that can result from integrating hydrostatic, mechanical, and control systems through a modular approach.”
HVTs from Dana Rexroth improve productivity by enabling sensitive, precise vehicle positioning with a stepless drive that offers improved acceleration while maintaining tractive effort. They occupy the same space within the design envelope as conventional torque converter transmissions while allowing for engine downsizing.
The HVT optimizes the operating point of the diesel engine by decoupling engine speed from drive speed, and maintenance costs are reduced by utilizing hydrostatic braking and wear-free directional reversing.
This HVT system helps reduce complexity for equipment manufacturers, since the entire system of gears, clutches, and hydrostatic units is managed by an advanced electronic control unit (ECU) and optimized for efficiency by a single supplier.
The R2 HVT was exhibited at CONEXPO by Dana in booth 85114 as part of a 23-ton (21-tonne) drivetrain system for front-end loaders, and by Bosch Rexroth in booth 80216.