On December 4, Bonfiglioli held a ribbon cutting ceremony for the new production line at its Hebron, KY, facility, which is the company's first manufacturing line in the U.S. 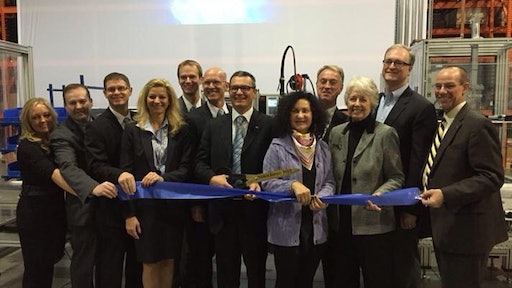 Bonfiglioli USA, the Northern Kentucky branch of Italian-based Bonfiglioli Riduttori S.p.A., celebrated its new assembly line for planetary gearboxes with a ribbon-cutting ceremony. The event was held December 4, 2014 at the company’s North America headquarters in Hebron, KY, where the assembly line is located.

In her remarks, the Lt. Governor stated that “the Governor and I strive to help companies like yours grow and expand, which is why we promote a manufacturing-friendly environment throughout the Commonwealth.”  She further stated, “We also share your enthusiasm for selecting Northern Kentucky for its available workforce, training programs and centralized location.”  The Lt. Governor then presented both Bonfiglioli and Schulte with a gift from the Commonwealth.

Judge Moore, a member of Northern Kentucky Tri-ED’s Executive Committee, also shared comments with the attendees. “Northern Kentucky has been recognized as a top location for advanced manufacturing in the U.S. and the jobs that Bonfiglioli is creating will have a significant economic impact on our region and the lives of many families.” Judge Moore then presented a framed print from world-renowned photographer Doug Prather.

In a news release from the Governor of Kentucky’s office, Governor Steve Beshear said, “Bonfiglioli has found a successful home here in northern Kentucky. We’re proud to have the company’s first manufacturing line in the U.S., and especially happy to see this expansion. Kentucky continues to set the standard for advanced manufacturing, and companies such as Bonfiglioli are a big reason why.”

Bonfiglioli, Carboni and Schulte all commented on the collaborative efforts between the headquarters in Italy and the USA operations, which has resulted in the installation of a state-of-the-art assembly line that will enable Bonfiglioli to better serve its customers in North America.

About the assembly line

The Hebron production line is the first line of manufacturing in the U.S. for Bonfiglioli and will increase the company’s annual capacity of planetary gearboxes by about 24,000 units in the first year to better serve the demand for these gearboxes in the U.S. market. With six different SKUs, the production line will create over 30 new warehouse, operations and assembly positions, with an additional 10 to 12 support positions, when at full capacity.

The Hebron facility has also integrated a state-of-the-art quality lab for testing equipment throughout the assembly process, with multiple quality checks and controls performed. To continue Bonfiglioli’s tradition of engineering excellence, the majority of product engineering will remain with the headquarters in Forli, Italy, while continuing to work closely with customers and the application engineers in Hebron, to design personalized solutions for each customer.