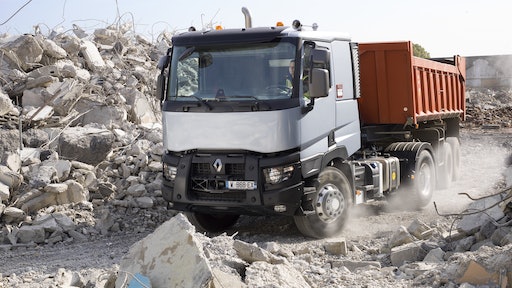 Renault Trucks will be displaying a wide range of its C and K Construction range vehicles during the The International Exhibition of Machinery, Materials and Equipment for the Construction Industry, Intermat, from April 20 to 25, 2015 at Paris-Nord Villepinte. This will be an opportunity for Renault Trucks to introduce the new configurations of its C and K vehicles and its service offering to support them. The many versions available and the modular options between the two ranges enables Renault Trucks to offer construction companies robust transport solutions designed to reduce their operating costs, whatever their field of specialization.

On its stand, Renault Trucks will be exhibiting a C 8x4 XLOAD (equipped with a cement mixer). The C XLOAD model has benefited from particular efforts to reduce its unladen weight, allowing builders to load more concrete on each trip so as to increase their productivity and cost efficiency.

Renault Trucks will also be exhibiting the C 8x4*4 Tridem. Its fourth steering axle brings its turning radius down to 90 cm, making the vehicle much more maneuverable. It has also been designed for bodies with a heavy load on the rear part of the vehicle such as a platform crane, a detachable tipper, a boom arm or an industrial vacuum unit.

For quarry working activities, customers will be able to see the K 8x4 Xtrem, which stands out for its reinforced chassis and new Optidriver Xtrem gearbox with more resilient mechanics for this type of demanding application. The K Xtrem is fitted with 24 in. tires, which are approved for use on road surfaces. Renault Trucks was the first manufacturer to introduce these tires on production trucks in Europe. They further increase the K’s load capacity and obstacle clearance capability, thanks to its higher ground clearance and greater approach and escape angles.

Furthermore a Renault Trucks C 6x4 OptiTrack will also be on display. OptiTrack offers vehicles additional temporary pulling power thanks to two hydraulic motors fitted to the front wheel hubs. This system provides temporary all-wheel drive on demand, eliminating the constraints of a “conventional” all-wheel drive vehicle, particularly in terms of fuel consumption, loading height, maintenance costs and additional weight.
The C cab 2.3 m 6x4, a vehicle adapted to the needs of hauliers carrying out multiple deliveries of building materials in urban and suburban environments, will also be on display at Intermat. This vehicle is fitted with the OptiDriver robotized manual gearbox as standard. The cab’s height and reduced width gives drivers increased manoeuvrability and allows them to frequently get into and out of the cab more easily.

Customers will also be able to find vehicles from the C and K Construction ranges on our bodybuilder partners’ stands.