The Hafencity Riverbus features a MAN truck chassis, and transports passengers on both land and water. 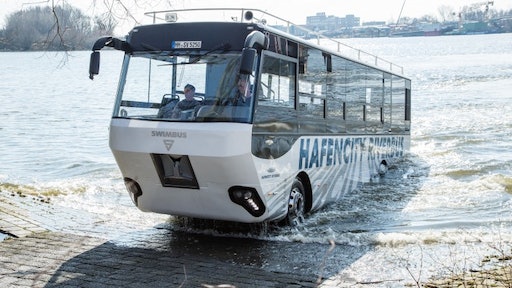 Is it a boat? Or is it a bus? Looking at the new Hafencity Riverbus in Hamburg, it is actually a bit of both. This makes the amphibious vehicle ideally suited to the port city on the Elbe, since the vast majority of its tourist attractions are located either on or adjacent to the water. Thus, the new attraction skilfully combines tours of the harbor and the city.

On land, the new river bus travels much like a normal scheduled-service bus and it is even equipped with stop request buttons. This is not because it will actually be calling at any stops on its way, but rather because it was a requirement for this unusual vehicle to be granted a permit. As the owner of the first amphibious bus in Germany, Fred Franken had to perform quite some pioneering work on many occasions. Which is why it took four years before the initial idea finally became a reality. Obtaining the permit presented in fact the greatest challenge, as German traffic law does not provide for amphibious vehicles.

"I already had the idea for this kind of project 18 years ago," explains Franken, a shipping merchant and self-confessed bus enthusiast. "Back then, I had seen a similar attraction in Singapore and it was immediately obvious to me that we definitely had to bring something like this to Hamburg."

Beneath the waterproof hull sits an MAN truck chassis; the body was provided by a Hungarian company. Another challenge arises when it comes to maintenance. "This is neither a bus nor a boat and there haven't really been any comparable vehicles up until now. So the workshop staff need an extremely high level of technical knowledge in order to quickly get to any parts in need of repair," explains Mike Vannauer, Regional Manager Bus Sales North at MAN Truck & Bus Deutschland GmbH. As a skilled mariner, his heart does of course beat a little bit faster when it comes to this special vehicle. Workshop-based maintenance is carried out by the MAN service outlet at Moorfleet.

To add a little more to the challenge, the river bus is currently also only available for maintenance for a maximum of one day per week. After all, the response to the city cruises has been huge: "In the first two months of operation, we have already had over 6,000 passengers on board, including locals as well as many people from further afield," enthuses Franken, who is thrilled by how well his idea has been received. Other cities have also been keeping an eye on the developments in Hamburg's harbor, with orders for a further five to seven amphibious buses already in the pipeline.