A component manufacturer expands its hub and spindle testing capabilities to enable creation of more optimized products and improve time to market. 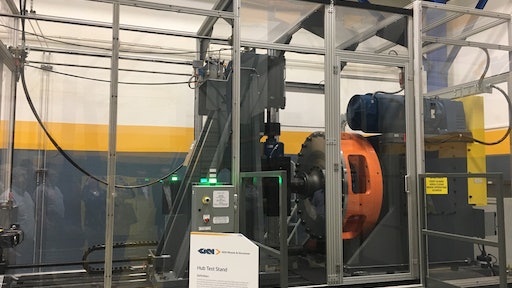 On May 24, GKN Wheels & Structures held an open house at its Woodridge, IL, facility to demonstrate its new, custom-designed hub test stand. The machine is capable of applying loads of up to 100,000 lbs. (45,359.24 kg) to perform fatigue testing of hub and spindle assemblies.

Since there was nothing else like it on the market, the entire test stand was custom built for GKN. “The biggest thing we had to look at, because nobody had done anything quite like this before, was defining the need,” said Dahl during the open house event. “The load was the biggest challenge we came across. Once we said we needed a 100,000-lb. load, the challenge became getting the structure of this whole thing to handle it.”

Due to the load and other needs, most of the components, such as the test stand’s bearing, were custom built. Dahl said very few off-the-shelf components were used. Even the floor of the test facility had to be engineered to handle the size of the machine.

The test stand was installed in February of this year, and during the open house, attendees were able to see the machine in action as it conducted its first live test on GKN’s largest capacity hub, rated at 60,000 lbs. (27,215.54 kg). While it can operate at speeds up to 300 rpm, Dahl said that for general large hub applications it will run around 10-20 rpm. “Speed matters, because bearings care about speed,” said Dahl. “We’ve never been able to really truly vary the speed until we got this machine.”

He explained that traditional hub testing has been done at a single, constant speed. But now with the new hub test stand, GKN has the ability to calculate the speeds at which it wants to run its tests. It can vary test load, replicating any duty cycle it wants, as well as vary shaft length; up to a 5 ft. (1.52 m) long shaft can be put onto the hub which Dahl said equates to a 6 million in.-lb. (678 kN-m) bending moment. To provide perspective, he said the larger cornering fatigue test stand at the Woodridge facility—another custom-built machine and one of the largest known in the market—has a 1 million in.-lb. (103 kN-m) bending moment.

The hub test stand is also able to duplicate maximum loads hub bearings would experience over the life of the test, which Dahl said is unique from what anyone else in the industry is doing. “We are developing the test standard as we speak for this product; nothing exists out there today,” said Dahl. “The only that’s been done has been for over-the-road trucks.” Off-highway equipment, such as an agricultural implement, experiences different loads and duty cycles from, necessitating a different test standard.

Dahl said the ultimate goal with having the new hub test stand is to eliminate the need for field testing, or at least minimize it, and cut field testing time by one third. This will help GKN bring products to market faster as it will not have to wait for the right weather or field conditions in order to test products. Dahl expects typical tests will last about 5 days, and be used for GKN’s larger hubs with capacities of 10,000 lbs. (4,535.92 kg) and above. Smaller products will continue to be tested on the cornering fatigue test stands at the facility.

Another thing he said the company is looking to do with the new test stand is optimize hub castings. In the past there was no way to test for casting optimization, but Dahl said the company has a good inclination that castings today are over-engineered. By optimizing the casting, GKN hopes to find weight savings for customers so they can then translate that reduced weight into fuel savings or additional load carried by a piece of equipment. “As much as it may not sound like it, some of these castings weigh a few hundred pounds,” said Dahl. “Pull 50 or 60 lbs. (22.68 or 27.22 kg) out of it, that’s 50 or 60 lbs. more [farmers] can stick in the grain cart. It all helps with productivity, and ground compaction; we’re getting to point in technology, [and in the] agricultural industry especially, [where] every pound counts.”

The radial fatigue test stand applies load to wheel and tire assemblies, and has a 60,000-lb. load capacity.S. Jensen

The addition of the new hub test stand at the Woodridge facility is part of an overall investment of about $25 million GKN Wheels is making globally at its various facilities. Paul Wyatt, Managing Director of GKN Wheels & Structures, said these include the second phase of an investment into the company’s facility in Estherville, IA, which will enable it to make bigger, wider diameter wheels for higher horsepower tractor applications.

Wyatt said a new rim line is being installed at the Telford, UK facility, as well. This update to the facility will make it one of the most modern, flexible and up-to-date off-highway wheel manufacturing facilities in the world.

“We are investing in the business at a time which has been tough,” for the off-highway industry, said Wyatt. However, the company is seeing signs of recovery, and believes it is well placed to support customers with that market recovery. “[We’re] well placed because of [our] investments, engineering and global footprint,” he concluded.

Watch the smaller of GKN's two cornering fatigue test stands test one of its hub products.

The TM1000 tire has been updated to include ProgressiveTraction tread technology for improved performance in the field.
Trelleborg Wheel Systems America Inc.
May 1, 2021
Follow Us