Continental has invested € 35 million for research on farming and extraction process at the new facility where 20 employees will work on an alternative for rubber. 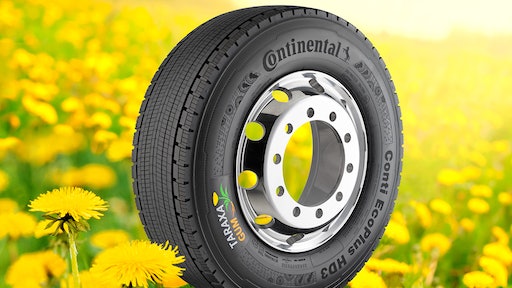 On December 6, Continental, the technology company and manufacturer of premium tires, officially inaugurated its research laboratory named “Taraxagum Lab Anklam” in Anklam, Mecklenburg-Western Pomerania, Germany, and presented it to the public. After the ground-breaking ceremony in November 2017, the building - covering an area of 323,000 sq. ft. (30,000 sq. m) - is ready for occupation just 1 year later and has therefore been completed on schedule. It is set as the base for future research on farming and the extraction process of Russian dandelion as an alternative raw material source to the rubber tree in the tropics. If initial test results indicate viability, the tire manufacturer is planning to introduce the raw material into serial production within 10 years, in order to obtain an increasing proportion of its natural rubber demand from the dandelion plant.

At the opening, Nikolai Setzer, member of the Executive Board of Continental AG and head of the Tire division, said, “We are proud to inaugurate this lighthouse project today. We are the first tire manufacturer in the world to invest such a significant amount in industrializing dandelion rubber. We see Russian dandelion as an important alternative and complementary to conventional natural rubber from hevea brasiliensis allowing us to meet rising global demand in an environmentally compatible and reliable way.”

Additionally, the investment in the new research laboratory is another technological milestone on the road to implement the Vision 2025 Continental has developed for its tire business. “As part of our Vision 2025 strategy, we have invested far more than € 2 billion in production, research, and development as well as in jobs and new products worldwide since 2011. 2018, Anklam now features prominently in the series of unique projects in Europe, America, and Asia,” highlighted Setzer.

In the medium term, around 20 employees with background in agricultural sciences, chemistry, and production and process technology will search on plant cultivation as well as developing, setting up, and operating machines for processing Russian dandelion at the new location. The Ministry of Economic Affairs of the state of Mecklenburg-Western Pomerania supported the future-oriented project in order to create the high-quality jobs locally. The new business location creates opportunities for farmers in the region and their cultivation areas, too. During the opening ceremony, Harry Glawe, Minister of Economic Affairs of Mecklenburg-Western Pomerania, Michael Galander, the Mayor of Anklam, and site manager Dr. Carsten Venz addressed the attending project partners, journalists, farmers, neighbors and residents of Anklam.

“We have been working to understand the molecular basis of the rubber biosynthesis in the dandelion plant for many years. This biological understanding has now brought industrial use within reach. With the new test laboratory, Continental has broken new ground that makes this transfer concept highly visible,” emphasized Dirk Prüfer, Professor of Plant Biotechnology at the University of Münster (Westfälische Wilhelms-Universität Münster – WWU) and site director of the Fraunhofer Institute for Molecular Biology and Applied Ecology IME, Münster branch.

Continental had presented the plans for the laboratory in August 2016 and began construction in Anklam in November 2017. The tire manufacturer has been conducting research into replacing natural rubber from the tropics with plants which can be grown at moderate climates since 2011 in collaboration with the Fraunhofer Institute IME in Münster, the Julius Kühn-Institute in Quedlinburg, the plant breeder ESKUSA in Parkstetten and other partners in various research projects with support from the German Federal Ministry of Education and Research as well as the German Federal Ministry of Food and Agriculture. The first sample of a premium winter tire featuring a tread made from pure dandelion rubber was brought onto the road in 2014. The first truck tire with a tread made from Taraxagum then followed at IAA 2016.

The TM1000 tire has been updated to include ProgressiveTraction tread technology for improved performance in the field.
Trelleborg Wheel Systems America Inc.
May 1, 2021
Follow Us