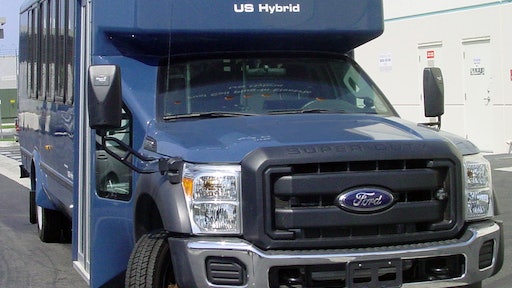 Though they have been in use since the 1940s and 50s—particularly in aerospace and defense applications—the widespread use of fuel cells to power vehicles has yet to occur in the heavy-duty marketplace. US Hybrid Corp. (company information, 11243920), Torrance, CA, is hoping to change that.

US Hybrid designs and manufactures power conversion systems for electric, hybrid and fuel cell vehicles, as well as the auxiliary components used to make fuel cells run. The company recently acquired the rights to further develop and manufacture fuel cell technology for commercial applications developed by UTC Corporation, a developer of fuel cells used in the aerospace and defense industries, as well as for transit buses in support of the Federal Transit Administration. Along with acquiring the rights to further develop the UTC technology, US Hybrid took over a contract provided by CALSTART to develop and commercialize the next generation of cost-effective fuel cells for transit buses (learn more, 11131660).

According to Dr. Abas Goodarzi, President of US Hybrid Corp., the company’s goal is to make fuel cell buses pay for themselves within 3 to 5 years while providing zero emission transportation.

To achieve this goal, US Hybrid intends to make the fuel cell as easy to integrate into a bus as any engine. “In addition to all the technical work that UTC was doing, we’re adding a lot of electronics to the fuel cell to make it [more user friendly],” explains Goodarzi. By adding more electronics, the fuel cell will not require an OEM to spend a lot of engineering time, and thus cost, making the fuel cell work with a vehicle design. Instead, US Hybrid does all the design work—integrating all of the electronics, cooling and other components—and provides OEMs with a plug and play solution. “We are making the fuel cell act or be treated just like an engine because people know how to [install] an engine,” says Goodarzi.

Currently fuel cells require a lot of engineering know-how, which is part of the reason they are more costly to deploy. However, Goodarzi says US Hybrid is “hoping that ease of use will bring the total cost down [and] therefore expand the market [use of fuel cells].”

Beyond ease of use, adding electronics to the fuel cell offers several other benefits to the vehicle owner. Electronics help to extend the life of the fuel cell through easier diagnostics capabilities, finding potential problems with the system before it creates catastrophic failure and unscheduled downtime. The fuel cells will perform most of the diagnostics necessary to inform operators and maintenance personnel about the preventive maintenance needed on the fuel cell to keep it running efficiently, helping reduce downtime and operating costs. In addition, use of the fuel cell will help extend the life of components such as brake pads since the majority of braking is performed through regenerative braking.

US Hybrid intends to do for fuel cells what Apple did to the cell phone industry, explains Goodarzi, which is to include extensive diagnostics, prognostics and wireless communications technologies (such as Wi-Fi).

Interest in using fuel cells to power vehicles has grown in recent years as the global population has become more concerned with minimizing its impact on the environment. Unlike an engine, which powers a vehicle through fuel combustion and creates harmful emissions, fuel cells emit no harmful pollutants because they power vehicles through electricity.

Within the fuel cell a chemical reaction between oxygen and a fuel source—typically hydrogen, although natural gas or methane can be used as well with an on-board reformer—enables electrons to be separated from the hydrogen fuel source to create electricity. The remaining hydrogen and oxygen then combine to become warm, mist-like water that is emitted from the vehicle’s exhaust. “We take [the] electron and use it wisely,” says Goodarzi. Extracting the electron from the hydrogen, he continues, is the most efficient means of energy generation.

Goodarzi says the fuel cell reaches upwards of 60% efficiency compared to a diesel combustion engine, which is around 30 to 40% efficient (15 to 25% for gasoline and 10 to 20% for CNG). “We double or triple the fuel economy,” he says. “We get twice the amount of mileage for the same energy equivalent [as a] diesel with zero emissions [and] exhaust.”

Precise control of the fuel cell also eliminates idling issues common to diesel and natural gas engines. Whether a vehicle is continuously moving or stuck in heavy traffic, its fuel cell will continue to provide the same efficient performance. “[For diesel and natural gas engines] the worse the traffic, the worse the fuel economy is. More than half of conventional bus energy used is due to traffic,” says Goodarzi.

Compressed natural gas (CNG) is the closest cousin to hydrogen. Because of this, they have similar storage needs. Goodarzi says that if people are willing to accept CNG engines they should be just as willing to accept hydrogen fuel cells. While CNG is cheaper, Goodarzi notes it still requires a combustion process to power the vehicle and is therefore a third less efficient as a fuel cell. Also, when natural gas is burned it creates toxic emissions whereas hydrogen does not when burned. “If you accept a natural gas vehicle then the safety of that is equivalent to that of hydrogen,” he says. “Hydrogen is actually safer because it does not have the combustion process.”

Hydrogen can be generated either by using water and an electrolyzer—which uses electricity not used overnight  while the vehicle is at rest to create hydrogen—or reformers that will extract hydrogen from fossil fuels or biofuels. The hydrogen is then compressed to high pressure and stored at a hydrogen fueling station. A transit bus is typically filled in less than three minutes with 30 to 40 kg of hydrogen. A battery, on the other hand, can weigh about 13,000 lbs. to store same amount of energy and takes hours to charge. “The high energy content of hydrogen enables faster fueling and a lighter weight [storage tank], making fuel cells a better choice for some longer-hour transit applications,” says Goodarzi.

According to Goodarzi, there is no limitation to the size or type of vehicle on which a fuel cell can be used. US Hybrid has developed fuel cells for a range of vehicles from transit buses to commercial and military trucks in the 57 ton range. “For mining or facility forklifts, fuel cells play a big role because when [the vehicle] is running there are no emissions,” he says. “That means [the mine or facility doesn’t] have to have expensive ventilation.” (Read more from OEM Off-Highway about the use of electric vehicles in underground mining in “Electric underground,” 11224086).

While there is no limitation on the types of vehicles fuel cells can be used on, Goodarzi says vehicles traveling 100 miles or more a day are the best fit for fuel cells. At 100 miles or more, the lighter weight and volume of the fuel cell is more advantageous than a battery due to the fuel savings it will offer. “If the range is limited, say between 50 and 100 miles, then I would say you could consider electric versus battery versus fuel cell,” he says. “But once you go above 100 miles on commercial heavy-duty vehicles, then you really need to go to a fuel cell, and your range is as good as your [storage] tank.

“From a functional operation in a fleet, really there’s no limitation in terms of range, performance or handling,” adds Goodarzi. “The main handicap that remains is to make it cost effective. That’s what we are focusing on right now.”

The Federal Transit Administration’s (FTA) National Fuel Cell Bus Program is an initiative between the U.S. Government and the mass transit industry to advance fuel cell technology for transit buses. Funding for research and development has come from both parties.

According to the FTA, the primary focus of the program is on commercializing heavy-duty fuel cell transit buses. Goals of the project include: