A fuel saving system that determines whether to coast down a hill or not using both GPS and topographical maps adds to evolving vehicle productivity features. 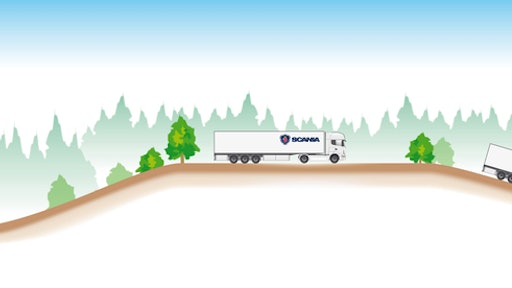 System automation is quickly changing the way we think about vehicle control systems and machine intuition versus operator interaction. The less engagement from operators, the better machine efficiency seems to get. Eliminate operator error one function at a time.

Utilizing a combination of geographic positioning (GPS) and topographical maps, Scania's Active Prediction system automatically calculates which mode of downhill travel is the most fuel efficient—cruising in neutral with the engine idling or under normal engine braking with the fuel supply switched off. This Eco-roll feature is available to any of Scania's European customers that order a truck with its Opticruise with Active Prediction and has a two-pedal system and a Euro 6 engine. Opticruise is an automated gear changing system and the Active Prediction cruise control system uses GPS and map data to manage gear change strategies. Together they create the opportunity for the Eco-roll fuel saving feature that offers fuel savings opportunity of up to 2 to 3% compared to driving with conventional cruise control.

Once a truck has crested a hill, Eco-roll must take several factors into consideration for its calculation, says Örjan Aslund, Product Affairs for Scania AB (company information, 10659010), such as gradient, speed, rpm, length of downhill path, gradient and direction of what follows the downhill segment, and what speed can be expected after rolling for at least 10 seconds. All of those factors taken into consideration and yet there is virtually no lag between spatial evaluation to calculation to system action implementation.

If the system chooses Eco-roll to make use of the kinetic energy of the truck's weight, then the objective is to roll downhill in neutral  for at least 10 seconds for optimal performance; downhill segments that have less than a 10 second coast time are less beneficial for fuel efficiency. At the same time, engine speed should not be so high that engine braking is engaged which also negatively affects fuel energy already transferred to the engine.

Olof Larsson, a developer at Scania's Technical Center, has been quoted as saying that a general rule of thumb is that "it is always better to coast in neutral provided that the vehicle doesn't need to apply its brakes and won't lose too much speed."

It is up to the operator to select which of two performance modes in which the vehicle will drive. The Active Prediction system will either calculate decisions to use as little fuel as possible or to optimize a high average speed. The calculations and decision is made without operator intervention, however the Eco-roll feature is visible on the operator display and can be overridden at any time with the accelerator or brake pedal. The driver sees that Eco-roll is activated when the tachometer needle indicates idling speed and neutral are selected.

Currently the Eco-roll system is only available in a majority of Eastern and Central Europe, with Western Europe on the horizon as new topographic data becomes available to utilize. If a truck leaves an Eco-roll zone into an area with no topographic data, the display will turn grey and the cruise control function will return to conventional operation mode.

Along with the Eco-roll function, Scania's Active Prediction cruise control system has extended its capabilities to include gear control for shifting strategies on hills. Downshifts can be avoided by precise assessments of hill gradients and lengths. The system can also accurately determine whether one gear downshift is required rather than two, thus allowing the low-rev torque advantages of Scania engines to be utilized.

The more complex (or even more simplified) vehicles are being designed through advanced electronics, sensors and computing capabilities, the higher the opportunity for maximizing system efficiency and productivity. It just seems that the operator "need not apply" for the position any longer. The machines have it covered.

Using gravity and Eco-roll to lower fuel use

Hilly road conditions cause a vehicle to accelerate or decelerate by its own weight, making it hard for an operator to drive efficiently. Starting off as a research project at Linkoping University in Sweden, Scania’s advanced cruise control Active Prediction system provides support for truck operators to drive more economically, whether they are new drivers with little experience or seasoned veterans driving unfamiliar routes or in poor driving conditions.

In the drawing above, starting from the left you see a truck approaching an ascent. The Active Prediction system knows that the speed will drop and determines how much extra speed is needed for a fuel efficient hill climb. The strategy is to build up turbo pressure and climb with full use of engine torque and a minimum of gear changes. The vehicle speed is raised by up to 4% above the set cruise speed before the climb begins.

Upon approaching a descent where the vehicle would normally accelerate due to its own weight, the system reduces the speed before the down-slope section to minimize driving resistance and avoid unnecessary braking. This is the situation where the most fuel can be saved. The speed will be allowed to drop by a maximum of 8% of the set cruise speed before the hill. The Active Prediction system, at the same time, strives to use a high gear during speed reductions to minimize friction losses in the engine.

The system can also be integrated with the adaptive cruise control system to maintain the correct distance to the vehicle in front and allowing the driver to focus on traffic.