Electric throttle actuators create an easy way to increase the efficiency and functionality of equipment with mechanical diesel engines. 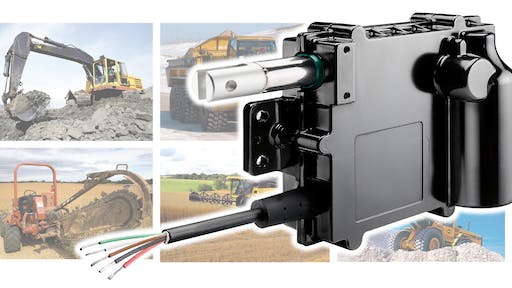 Modern electronic diesel engines use ultra-low sulfur fuel and have sophisticated fuel management systems that include integrated throttle control. Use of these engines results in machines which offer greater efficiency, enhanced functionality, increased operator safety and much reduced carbon emissions. In regions where emissions are highly regulated, they offer a solution to meet the equivalent of Tier 4 Final (T4F) EU Stage 4 emissions level. However, these benefits come at a cost and electronic engines may not be competitively viable in certain applications or geographical regions.

Traditional mechanical diesel engines cost much less than their modern electronic counterparts and it is expected they will continue to be used in a large range of horsepower ranges in many areas of the world for some time to come; in particular where emissions regulations are not as stringent or ultra-low sulfur fuel is not readily available. The use of electric throttle actuators on these engines provides an easily added, cost effective solution that increases efficiency, functionality, emissions rating and safety. Such actuators can control a mechanical engine smaller than 24.8 hp which achieves the equivalent of T4F /Stage 4 emissions level as well as larger engines in regions that allow Tier 3 emissions level.

The latest electric throttle actuators provide a cost effective way to control engine speed on mechanical diesel engines. Compact and easily installed, they enable greater freedom of machine design and the use of more ergonomically optimized controls. They can automatically control engine speeds based on demand, optimizing machine operation efficiency, reducing noise and increasing fuel economy. Electrak® throttle actuators from Thomson Industries, for example, are options for engine sizes of less than 24.8 hp, which are typically mechanical engines and achieve the equivalent of T4F (Stage 4) level emissions.

The benefits of moving from mechanical to electric throttle control

In mobile off-highway applications, a mechanical throttle cable connected to the driver’s cab has traditionally controlled the throttle on a drive or auxiliary engine. These cables have a large bend radius which presents design challenges in running cables, particularly to auxiliary engines because they are frequently located far from the cab. These size and space restrictions can lead to compromises in ergonomic design and result in non-ideal placement of controls for the user, making equipment more challenging to operate. Mechanical engines also require periodic lubrication that is difficult to complete and often overlooked, which may lead to issues with machine performance.

Off-highway vehicles use diesel or gasoline engines to drive the vehicle and to provide a power take-off to operate equipment. The drive engine is often used to power a hydraulic pump that drives a cylinder to perform work such as moving a boom and bucket on an excavator. Other examples of direct engine control can be found on skid steers, compact utility tractors, asphalt pavers, man lifts, and trenchers. Auxiliary engines, used on machines such as street sweepers, generators, welders and sewage or concrete pumps, can be difficult to control. Equipment functions can require that the engine is operated at different speeds for different tasks. When manually controlled, the risk of operator error can impact efficiency and increase the potential of damage to machinery. Engines can often be left running at operating speeds even when equipment is not being used, increasing fuel consumption, noise and emissions.

Installed in close proximity, or directly to the throttle linkage and requiring just an electrical cable or communications bus to the cab, electric throttle actuators offer significant benefit to the overall machine performance and efficiency compared with the use of mechanical cables. These throttle actuators can be controlled by a simple potentiometer, with or without limit switches, and can be positioned for optimal machine design as no direct access is required for operator interface. Potentiometer solutions are straightforward to incorporate into equipment; offer robust and reliable performance, and address many of the issues relating to machine design and operation using mechanical cables.

Electric throttle actuators can also be interfaced with a control system that can automatically optimize the speed of the motor to a pre-determined set point based on the work that is being performed. Multiple pre-set rpm levels can be configured to correspond to specific functions, such as an idle speed for start-up, high speed for traction or movement of equipment and mid-range speed for running of hydraulic pumps controlling the working function of the equipment. Pre-setting rpm levels can improve the performance and fuel economy of a machine while reducing noise and emissions. For example, if a crane operator is manually controlling the throttle, the operator is likely to keep the engine at the speed required to operate the crane even when the crane is not being operated for a short period of time. The control system can drop the engine speed to idle when the joystick is not moved for a defined time interval and, when the operator touches the joystick, automatically increase the throttle to the pre-defined operating engine rpm to ensure work can continue efficiently.

With a traditional approach an electronic control unit (ECU) is required for each actuator. By using smart actuators that use a communications bus (e.g. J1939), only a single cable needs to run from the controller to all actuators. Each actuator has a unique address, listens to every signal from the vehicle control system and responds only to signals regarding the engine throttle system. These smart actuators also provide status information, alerting the control unit of its speed and position and enabling a greater level of automation. The implementation of a bus system in a vehicle makes it simple to add additional sensors that can include other measurements such as temperature or load.

Electric throttle actuators also provide the opportunity to integrate throttle control with other vehicle functions. Take the example of an engine that must be operated at a speed of 2,000 rpm to power a hydraulic pump for a specific vehicle function. The control system simply sends out a command to the actuator to increase the speed of the engine. The system then watches the response from the tachometer and turns off the actuator when the engine has reached 2,000 rpm. It can then automatically turn on the equipment required to perform the specific function.

Modern throttle actuators are robust units designed to withstand underhood temperatures (with operating range from -40 to 125 C), vibration and moisture and provide the high cycle life required for demanding off-highway applications. New models can withstand water, dust and dirt and usually meet IP67 or IP69K standards - making them suitable for high pressure, high temperature wash down. A typical model is designed for 500,000 cycles and can operate on a 50% duty cycle at maximum dynamic load. The actuators are also designed and tested to withstand the shock and vibration levels typically seen in the off-highway environment

The use of electric throttle actuators and sensors that measure demand has been shown to reduce fuel consumption, noise levels and engine wear and tear by optimizing engine rpm on portable jobsite equipment such as generators and air compressors. An engine driven generator for charging batteries on a mobile communication or lighting system, for example, uses a sensor to control engine rpm in line with the charging requirement of the batteries. In applications such as man lifts, where generators are used to provide working voltage to portable power tools such as welders, grinders, drills, etc., controlling the speed of the engine is critical to providing appropriate voltage levels.

In applications such as irrigation and firefighting, the ease of remote operation of electronic throttle controls enables the operator to adjust flow from a remote position, which is particularly useful because pumps provide output directly proportional to the rpm of the engine.

Overall, the use of electric linear actuators makes machine design easier. Electric throttle actuators enable more efficient operation of mechanical diesel engines and, by providing a greater range of control, facilitate the automation of processes to increase productivity, reduce noise, improve safety and provide greater fuel economy with more environmentally friendly solutions. These robust actuators are virtually maintenance-free and, in many applications, offer an economic alternative to electronic engines with full fuel management systems. For engines less than 24.8 hp, throttle actuators interface well with commonly available mechanical engines that meet T4F emissions levels. Where emissions standards are less stringent, electric throttles are used with mechanical engines of various sizes and give the opportunity to add functionality that can give an OEM a competitive edge as well as improve environmental performance of machinery.